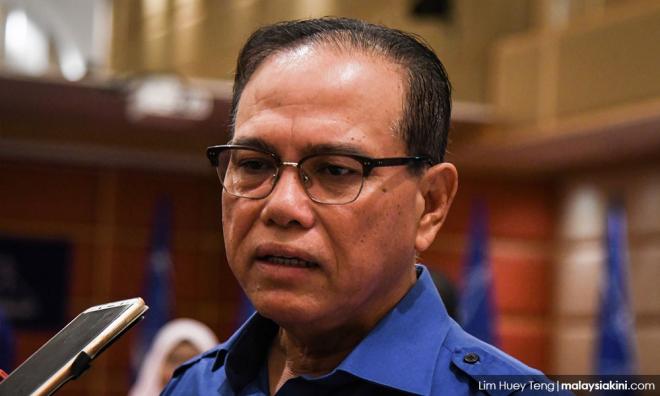 Pahang Menteri Besar Wan Rosdy Wan Ismail has fired a salvo at Penang Deputy Chief Minister II P Ramasamy, urging him to focus on the eviction issues in Penang instead of meddling in Pahang affairs.

Wan Rosdy also refuted the claim by Ramasamy that the Cameron Highlands farmers facing eviction had farmed on the land since more than 60 years ago.

He said although temporary occupation licences (TOLs) were issued to the farmers, whom he described as "trespassers", they had gone against the conditions imposed on the land by building a permanent structure.

They also used poisonous materials, which were not permitted by the Agriculture Department in Sungai Ichat, when carrying out their farming activities.

"The TOLs issued to the farmers championed by Ramasamy were done in 1993, only 26 years ago, and not for 60 years as the latter claimed," Wan Rosdy said in a blog post yesterday.

"This is a fact recorded by the Cameron Highlands district council. We are not able to verify whether they have farmed on the land for 60 years," he added.

"Before this, only 50 TOLs were issued in the names of the family heads. Later, the TOLs were used by family members as well."

The Pahang menteri besar went on to say that if the farmers complied with the strict rules, there should be no problem, especially when it concerns efforts not to pollute the environment.

"It is not fair to give special treatment to these farmers if thousands of Cameron Highlands residents would be later affected," Wan Rosdy said.

"Isn't it better for Ramasamy (photo, above) to focus on why the farmers were evicted, their (Penang government’s) demolition of villages around Penang instead of meddling in Pahang issues?" he asked.

He said both Sungai Ichat and Sungai Terla are the raw sources of water for Terla.

Wan Rosdy was responding to Ramasamy who accused him of "not telling the truth" about the eviction of farmers from Kuala Terla after Wan Rosdy had said that the farmers have polluted Sungai Ichat, the main source of water for Cameron Highlands.

Ramasamy has also urged Wan Rosdy to resign from his post over the eviction, asking him to find a solution for the farmers, who he claimed farmed on the land for 60 years.

Yesterday, NGO Malaysian Tamilar Kural lodged a police report against Wan Rosdy in Kuantan, while DAP Bagan Dalam assemblyperson Satees Muniandy and local councillor David Marshel lodged a report with the MACC about possible abuse of power in dealing with the farmers.

"He should have discussed with Wan Rosdy to find a solution for the farmers. Instead, he demanded for the MB's resignation," said Ravee.

"Who is Ramasamy? He had issued such substandard remarks although he is a senior leader and professor who is such an expert in the political arena.

"This cheap flick shows his stupidity and immaturity in politics that DAP should be ashamed of its party leaders who play cheap politics to gain popularity.

"In the years 2003, 2009, and 2013 when the issue came about, MIC Kuala Terla and BN have been assisting the farmers without being aware of the real situation and history behind the issue," Ravee added.

"So, Ramasamy, please cease your drama in Cameron Highlands."