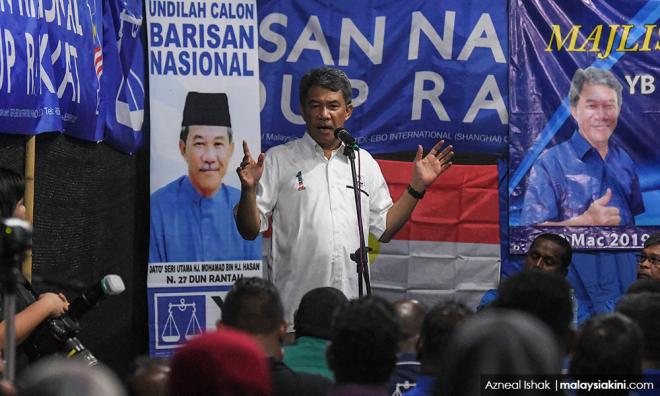 Mat Hasan: We want to bring forth a two-party system

RANTAU POLLS | The role of the opposition now is to ensure that Malaysia moves towards a two-party system where no ruling coalition can govern for more than three terms, says acting Umno president Mohamad Hasan.

At his maiden ceramah speech in Rantau last night, the BN candidate said that for a start, the opposition should aim to provide adequate check and balance on Pakatan Harapan.

"I've said this before. Malaysia will be a developed nation and we must be prepared for mature politics – politics that involve a two-party system.

"In a two-party system, no party can rule for more than three terms. At most, two terms.

"This is what we are trying to create. BN is trying to bring forth an opposition coalition to check the Harapan government," he said.

Mohamad told the ceramah audience that Harapan is now experiencing "nightmares" because Umno and PAS were working together, to the point that the two parties are being compared with the Taliban.

"BN has ruled the country since 1957. We didn't turn the country into a Taliban state. PAS ruled Kelantan for five terms. There are no Taliban in Kelantan. Non-Muslims live freely and peacefully.

"Kelantan has one of the largest reclining Buddha statues in Southeast Asia. This shows PAS is tolerant of other religions and culture. (The Taliban claim) is merely an attempt to scare the rakyat," he said.

Mohamad said that if Umno and PAS were to cooperate, they will be able to wrest control of the federal and Negeri Sembilan government with ease.

He also assured that Umno and PAS will incorporate other BN parties as well in their plans.

After several false starts, Umno and PAS officially campaigned for each other during the Cameron Highlands and Semenyih by-elections earlier this year.

BN won both contests, with the victories widely attributed to the support given by PAS supporters.

In the April 13 polls for Rantau – the state seat he held from 2004 until his win in last year's general election was voided – Mohamad will face off against Harapan's Dr S Streram, as well as independents R Malar and Mohd Nor Yassin.

mohamadhasan
rantaubyelection
Related Reports
KJ urges Rantau folk to make it a hat-trick for Mat Hasan
a year ago
Battle for Rantau: Meet the candidates
a year ago
Turns out indie candidate is an Amanah member
a year ago
Rembau chief says pride of Anwar, PKR at stake in Rantau
a year ago