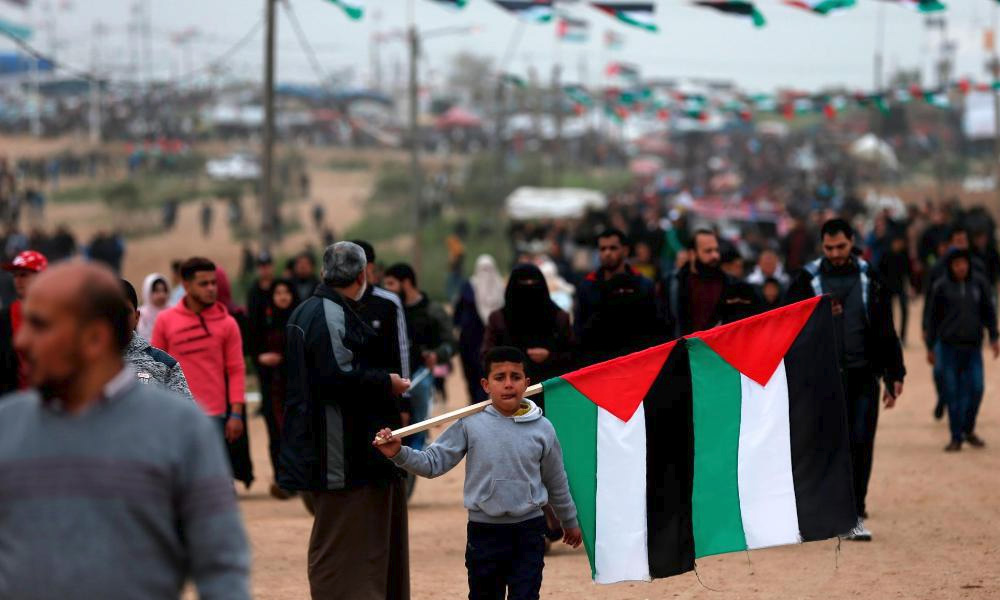 Tens of thousands of Palestinians rallied at the Israel-Gaza border on Saturday, facing off against Israeli tanks and troops on the first anniversary of the ‘Great March of Return’ demonstrations.

Israeli forces had massed the other side of the fortified frontier, with tensions already high after a rocket attack from Gaza and Israeli air strikes earlier in the week.

Four Palestinians were killed on Saturday, Gaza medical officials said. Three were 17-year-olds shot dead by Israeli troops while protesting, they said, adding that another person was killed at an overnight protest hours before the main rally.

Saturday’s rally was smaller than expected, despite concerns that the anniversary would see a major escalation.

Loudspeakers at border protest camps played Palestinian nationalist songs and Hamas, the armed Islamist movement which controls Gaza, had ordered schools to shut for the day to encourage participation.

The protesters are demanding the end to a security blockade imposed on Gaza by Israel and Egypt, and want Palestinians to have the right to return to land from which their families fled or were forced to flee during Israel’s founding in 1948.

Israel rejects any such return, saying that would eliminate its Jewish majority.

Hundreds of Palestinian men, some from Hamas, were deployed in bright orange vests to deter people from going near the fence. There was also less acrid black smoke swirling around with little sign of tyre-burning, as on the previous weekend.

The Israeli military said there had been around 40,000 protesters, some hurling grenades and explosives.

Lieutenant-Colonel Jonathan Conricus, an Israeli military spokesperson, said the day had “lots of rioters but significantly less violence”, adding that it showed Hamas was able to stop violence when it wanted to.

But many protesters still managed to get near the border and throw stones at Israeli soldiers.

Around 200 Gazans have been killed by Israeli troops since the protests started on March 30 last year, according to Palestinian Health Ministry figures. An Israeli soldier was also killed by a Palestinian sniper.

“In a year I will finish school. My father is unemployed so I will be unable to go to university. Who is responsible? Israel,” said 16-year-old protester Mohammed Ali.

“I don’t know how many years will pass before our lives improve, but we should continue (protests) as long as the occupation and the blockade exist.”

Israeli Prime Minister Benjamin Netanyahu’s (above) handling of the protest was under close scrutiny at home in the build-up to Israeli elections on April 9.

The veteran Israeli leader faces a serious challenge from a centrist party led by a former general and pressure from hawkish allies in his right-wing coalition to be tough on security.

The week before the anniversary saw a flare-up of cross-border violence after a rocket fired from Gaza wounded seven Israelis north of Tel Aviv on Monday. In response, Israel launched a wave of air strikes and ramped up its forces at the border.

Egyptian mediators intervened to avoid further escalation, and to ease tensions by persuading Israel to lift restrictions on the movement of goods and people in and out of Gaza.

A long-standing Israeli-Egyptian blockade on Gaza is cited by humanitarian agencies as a key reason for impoverishment in the narrow coastal enclave, into which two million Palestinians are packed.

Hamas leaders said on Saturday progress had been made in the Egyptian talks, but that they still had a list of demands from Israel.

“In the coming days we hope to conclude the negotiations and achieve a real breaking of the blockade,” Yehya Sinwar, Hamas’s leader in Gaza, told Reuters at one rally.

Israel seized Gaza in a 1967 war and pulled out its troops in 2005. It says the security blockade is necessary to stop weapons reaching Hamas, which has fought three wars with Israel and fired thousands of rockets at it in the past decade.

Israel’s use of lethal force at the protests has drawn censure from the United Nations and human rights groups. UN investigators last week said Israeli forces might be guilty of war crimes for using excessive force.

Israel says its troops have no choice because they are trying to stop militants breaching the fence and attacking Israeli communities nearby. Palestinians have also launched incendiary balloons and kites into Israel.

March 30 also marks 'Land Day', an annual commemoration of six Arab citizens of Israel who were killed by Israeli security forces during demonstrations over land confiscations in 1976.