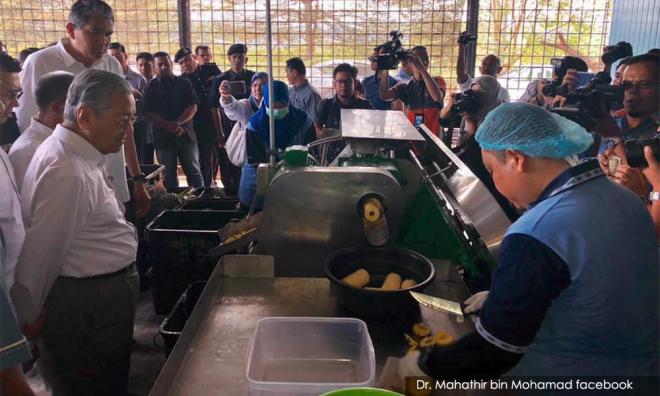 Mahathir arrived at the factory at 10am in a car with himself at the wheel, accompanied by adviser Daim Zainuddin.

Agriculture and Agro-based Industry Minister Salahuddin Ayub joined them on the visit.

The prime minister had the opportunity to see up close the process of making pineapple juice and was also given a briefing by the management on its operations.

The owner, Abu Hassan Man, when met by reporters, said Mahathir was amazed at his capability as a Malay to open such a factory which was running like a “well-oiled machine.”

"I was informed that Mahathir had said he did not believe that this is a Malay-owned factory, when Daim brought him here, Mahathir admitted that Malays also have the capability,” he said.

Abu Hassan said Mahathir’s visit had fired him up further to expand his business, and was now looking at a bigger market for his products.

"He (Mahathir) said that if one wanted to manufacture goods, it must be marketed overseas and go for big cities. At the moment, my products are only marketed in the northern region (of the peninsula),” he said.

On his factory, Abu Hassan said it has been in operation for two years and processes local fruits to be made into juices, purees, cordials, sauces and dried fruits.

"The operations of my factory can help the locals overcome glut of fruits they grow, like pineapples, cempedak, durian, jackfruit and mangoes," he added.