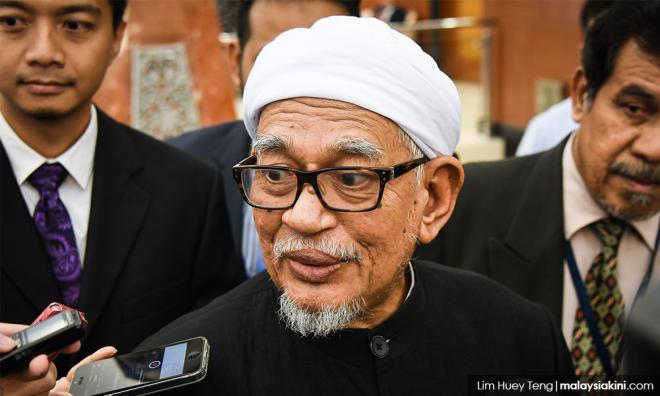 Hadi: PAS-Umno critics like 'Jews' who must be battled to save the country

PAS president Abdul Hadi Awang has likened those opposed to the party's cooperation with Umno to "Jews" who must be battled to "save the country".

According to The Malaysian Insight (TMI), the Marang MP, while he did not mention names, is believed to have been alluding to DAP leaders who have criticised the cooperation between Umno and PAS as targetting the non-Malay, and claiming it would turn the country into a Taliban state.

"When Umno and PAS unite, they are accused of wishing to go to war with other races. (Our accusers are) like the Jews who did not want Muslims to be united during the Prophet's time.

"This is a disease we must fight. Let's join forces and send the enemy to hell," Hadi was quoted telling a gathering in Sabak Bernam, Selangor, to canvass for support for the BN candidate in the Rantau by-election.

Elaborating on the Taliban-state claim, Hadi said that Malaysian and Afghan society and politics are vastly different.

“The Taliban subscribes to the Hanafi school of thought, where women may not go to school and elections are not allowed.

“But we in PAS, we open our schools to all, we have elections. It is not right to compare us with the Taliban.”

Meanwhile, speaking at the same event, Umno vice-president Ismail Sabri Yaakob reportedly said the Umno-PAS cooperation was a "jihad" (holy war) to overthrow the "anti-Malay, anti-Muslim" Pakatan Harapan government, which he claimed was led by DAP.

Sticking to the anti-DAP narrative, Ismail further claimed that under the new federal government, the Islamic Malay agenda has been set aside.

Pointing out to the Malay-majority state and parliamentary seat composition in Selangor, Ismail said it is "not impossible" for the opposition to wrest back the state, and eventually Putrajaya, from Harapan.