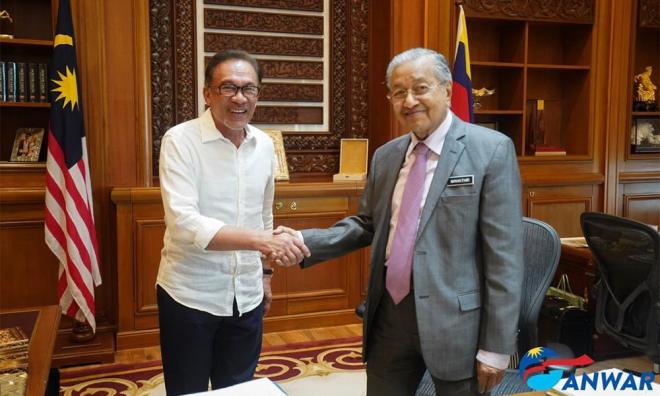 COMMENT | Soon after his coalition’s stunning victory in the 14th general election of May 8, 2018, Prime Minister Dr Mahathir Mohamad admitted that he had not expected it, thus the “thick manifesto with all kinds of promises”.

Today, nearly a year later and at 93 years of age, Mahathir, aware that he is getting “very old, and very soon I will weaken and I will die,” is a man in a hurry.

Mahathir does not need to confess, apologise, or lament. His dislodging the Najib administration was a monumental achievement in itself. Mahathir’s victory, expected or not, saved Malaysia. Having achieved that, it is time for him now to exit. Delaying would only risk tarnishing that singular achievement.

Mahathir should not wait to be asked, as no one would. That is not our culture. By the time we want our leaders to go, rest assured the message then would not be polite, much less subtle. Mahathir does not need any reminding on that.

Mahathir has nothing more to prove or achieve. Besides, if he could not accomplish his goals back then, when he ruled Malaysia unchallenged for over 22 years and when he still had his vigour and wits, the probability that he would achieve them now is nil. Time to declare victory and exit stage left.

There is little need for him to pit his debating prowess against bright young Oxford undergraduates, preach to Africans on beating corruption, or be bestowed the Highest Imperial Honour from the King of Konga.

Were he to linger, there is a real danger that old bad habits and repressive patterns, Mahathir Version-1 as it were, might re-emerge. That would not be good for him or Malaysia. Already, many of his utterances of late, especially his resorting to stereotyping, are verbatim quotes from his 1970 book, The Malay Dilemma.

Delaying would risk having to do it in a chaotic or precipitous manner. Malaysia cannot afford a leadership crisis. After the disasters of former prime ministers Abdullah Ahmad Badawi and Najib Abdul Razak, that would not be a worthy legacy.

Mahathir produced two dud leaders in Abdullah and Najib (photo above, on right); with Najib an insatiably corrupt one, too. Mahathir thus should not pick or be given the choice to pick his third successor.

Hand over power to Anwar Ibrahim, and do it now. That was the consensus before the election among the coalition partners, even though not stated in their manifesto. That was also the expectation of voters.

Mahathir validated that by seeking Anwar’s immediate post-election royal pardon, and his subsequent entry into Parliament via the Port Dickson by-election.

No one in Mahathir’s current cabinet is capable or worthy of leading Malaysia. I had high hopes in the beginning for Dr Wan Azizah Wan Ismail (below). She has the smarts.

However, her performance has been underwhelming. Perhaps her heart is not in it, believing that she is merely warming the chair for her husband. Or perhaps (intuiting from her displays of piety) she believes a community led by a woman is doomed for failure, as a prophetic tradition would have it.

Muhyiddin Yassin too, like Mahathir, is on borrowed time. He should be spending the remaining precious little time he has with his loved ones. He has been in politics and government long enough. He had not shined in all those years; he is unlikely to bloom now.

As for that character who cannot keep his advice to himself, Azmin Ali (above) was not even born in Malaysia. Not many countries would allow a non-natural-born citizen to be its leader.

As for his Emotional Quotient (EQ), an important attribute in a leader, Azmin is in conflict with all his siblings, as well as other family members. Don’t expect him to get along with his cabinet colleagues.

Azmin has yet to demonstrate his competence or relevance as a minister in charge of the economy. His bio touted him as an economics graduate from the University of Minnesota, which on the surface sounds impressive, except that he did not attend its prestigious flagship Minneapolis campus, instead one in the ulus.

Mahathir would be picking his third dud of a successor if he were to choose Azmin.

Anwar Ibrahim (above) remains the most capable to lead Malaysia. The Anwar of today is a very different person from the one who tried to upstage Mahathir in the late 1990s.

After being incarcerated twice on trumped-up charges, Anwar has emerged not only intact physically (except for his back ailment), but also stronger, wiser, and more tolerant. A lesser soul would have long ago crumbled or capitulated.

Anwar’s decency and humanity showed at the interview he gave on BBC soon after his pardon. He was serene, with no sense of bitterness towards those who had done him wrong. I saw Nelson Mandela in him.

Through his sense of humour, I also saw a man of deep faith. No mortal who has gone through what he did could have such equanimity as Anwar showed during that interview.

He was not riled up by the tough questions, as on the sensitive matter of his relationship with Mahathir – his erstwhile tormentor and the man he would like to succeed.

I have a special empathy for Anwar. He was a few years my junior at Malay College and I have many fond memories of supervising his evening class-prep hours. Our children too are of comparable ages.

The thought that struck me when Anwar was hauled to jail for the first time with his infamous black eye after being bludgeoned by the then chief of police was: how would I react if I had been Anwar?

What could replace those precious years of missing your children develop into and go through their turbulent adolescence, and then mature into young adults without your being there lending support and guidance? Most of all, to savour those precious memory-building moments that could never be replicated.

I had an earlier intimation of this inner, steely Anwar. Soon after his first conviction was reversed on appeal and while he was out on bail awaiting trial for his second sodomy charge, Anwar was allowed the rare privilege to travel abroad.

At a private dinner at Stanford given by his hosts, l asked him whether his being given that special dispensation was a divine sign for him to seek his freedom in the West, a view shared by many at the table. After all, many great leaders had done that.

My suggestion startled him.

“Oh no! I could never do that, Bakri!” he replied in his soft voice. He had a mission for his country and was determined to complete it regardless of the personal price or burden. I was humbled by his response.

That was the depth and strength of Anwar’s commitment. It is time for Mahathir, having done his part, to let his hitherto protégé, Anwar Ibrahim, move Malaysia forward.