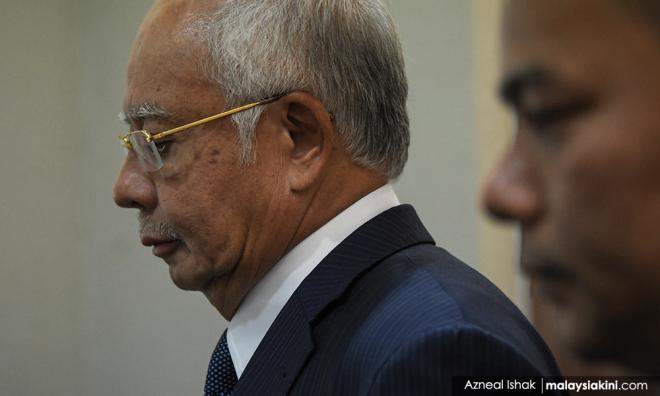 Mahathir played an instrumental role in removing Abdullah after a single term in office in order for Najib to take up the mantle of leadership.

Mahathir, his wife Dr Siti Hasmah Ali and son Mokhzani, who had quit Umno following his disagreements with Abdullah, had rejoined the party on April 4, a day after Najib became prime minister.

In welcoming him, Najib had described Mahathir's return as the “closure of an episode in Umno” and the “opening of a new chapter.”

“As a statesman, Tun (Mahathir) can play a big role to strengthen the party, as well as BN,” he said.

Little did Najib know then that Mahathir would soon turn his daggers on him or that, in a strange political twist, the latter would succeed him as the seventh prime minister and end BN's six-decade rule.

Tomorrow, exactly a decade after he became prime minister, Najib will be in court to stand trial for three counts of criminal breach of trust (CBT), one charge with abusing his post and three counts of money laundering over SRC International Sdn Bhd's funds, totalling RM42 million.

Following is the timeline, provided by Bernama, with regard to the case.

July 4, 2018 – Najib was charged for the first time in the Sessions Court with three counts of CBT and one charge of abusing his post over SRC International Sdn Bhd's funds totalling RM42 million. The case was later transferred to the High Court.

Aug 8, 2018 - Najib was charged at the High Court with three counts of money laundering involving the same money (RM42 million of SRC’s funds) in proceeds from unlawful activities.

Aug 10, 2018 - High Court Judge Mohd Nazlan Mohd Ghazali dismissed Najib's application for a gag order restraining the media and public from publishing statements on the merits of his criminal charges, which would infer Najib’s guilt pending the disposal of his case.

Aug 13, 2018 - Najib filed an appeal at the Court of Appeal against the High Court refusal to issue an order restraining the media and public from publishing statements on the merits of his case.

Dec 18, 2018 - High Court rejected Najib’s request to get the letter of authorisation (fiat) on the appointment of lead prosecutor Sulaiman Abdullah, and his application for discovery of documents pertaining to the case.

Jan 15, 2019 - Najib, through his legal firm, Messrs Shafee & Co, sent a letter to the High Court seeking the trial scheduled on Feb 12 to be vacated pending his three interlocutory appeals before the Court of Appeal.

Jan 17, 2019 - Attorney-General's Chambers (AGC) prosecution division chief Manoj Kurup, in a letter dated Jan 17, 2019 to High Court Judge Mohd Nazlan Mohd Ghazali, objected to the defence's request for postponement of the trial, saying that the application is “frivolous and would cause an unreasonable delay to the scheduled trial.”

Feb 11, 2019 - The Court of Appeal allowed Najib's application to temporarily postpone the trial pending the disposal of his appeal over the public prosecutor's withdrawal of the certificate of transfer on his seven charges.

Feb 14, 2019 - The Court of Appeal set March 11 and 12 to hear four appeals by Najib to reverse the High Court’s ruling over the interlocutory applications in the seven charges on the SRC funds.

March 21, 2019 - The Court of Appeal granted a stay to Najib to temporary stall the trial, pending disposal of his three appeals relating to interlocutory matters to the Federal Court, which were earlier rejected by the Court of Appeal.

March 21, 2019 - The Court of Appeal dismissed Najib’s three appeals, namely his appeals to obtain a gag order to prohibit the media and public from discussing the merits of his criminal case; access to investigation documents including witness statement at the pre-trial stage; and on the attorney-general's (AG) withdrawal of his transfer certificate.

March 21, 2019 - The Court of Appeal allowed Najib’s appeal to have Sulaiman produce his letter of appointment to lead the prosecution team in his case.

March 27, 2019 - The Federal Court seven-man panel allowed the prosecution’s appeal to lift the stay of proceeding order granted by the Court of Appeal to Najib to temporarily stall the trial pending disposal of his appeals over his interlocutory matters.

April 1, 2019 - Najib filed another bid (a judicial review application) against the Federal Court’s refusal to grant him an order to stay the trial of his SRC case.