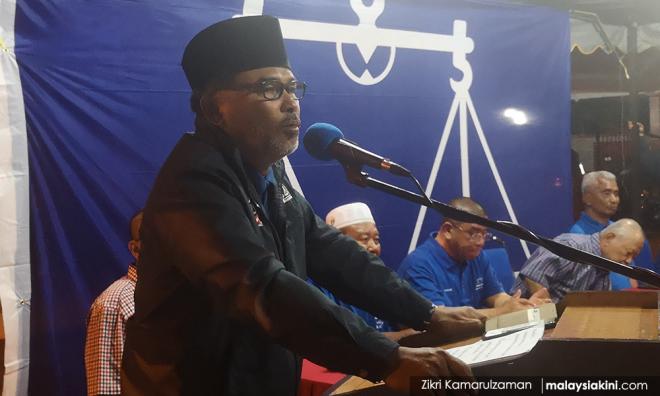 RANTAU POLLS | Bersih today calling for former Malacca chief minister Idris Haron to be investigated by the MACC for an alleged election offence.

The electoral reform group said that Idris' promise to supply goats for a feast in Rantau ahead of the April 13 by-election amounts to bribery.

“Bersih calls on the MACC to investigate this election offence of bribery by interviewing those who were present at the ceramah at Angsa Emas and the reporters who covered the event.

“Action should be taken, and the court should have the opportunity to hear such cases, so that precedent can be established to provide legal guidance on election offences,” the group said in a statement.

At the ceramah last night, Idris promised voters in the Angsa Emas polling district that he would sponsor two goats for a feast if they can give BN candidate Mohamad Hasan 300 votes in the coming polls.

In the 14th general election, BN lost out to Harapan by 22 votes in the district.

"(He) can't make such a promise. That is wrong. He made the promise, so that is his problem," he said.

Mohamad is going up against Pakatan Harapan's Dr S Streram, as well as independents Mohd Nor Yassin and R Malar in the by-election for the Negeri Sembilan seat.

'I will come back with two goats'

"EC, I'm not giving the goats now for them to vote for Mohamad, no," he said. "When they have voted for Mohamad and he has won (then I will provide the goats).

"I have no interest. This will be a thanksgiving. I will come back with two goats, complete with beards."

Despite Idris' argument, however, Bersih said his actions still amount to bribery under Section 10(c) of the Election Offences Act 1954.

According to the group, Section 10 applies “before, during, or after” an election, as long as a clear link can be proven between the act and the intent to induce voters.

“Though the act of throwing the feast is after the election, the corrupt intent started during the campaign period," it said.

Additionally, Bersih said that Section 10 is worded such that "anyone" could commit an election offence – not just election candidates, but also recipients of inducements.

Section 10 is the applicable provision in Idris' case, the group said, and not Section 8 of the same act, which deals with treating – which only applies if the promise is fulfilled.

"A conditional promise was made that he will provide the two goats after the election on condition that the Angsa Emas polling district gives more than 300 votes to Mohamad.

"This element of conditional promise differentiates it from the offence of treating.

"If he fulfils the promise by providing a feast after the election, it would then be Section 8 for the offence of treating."