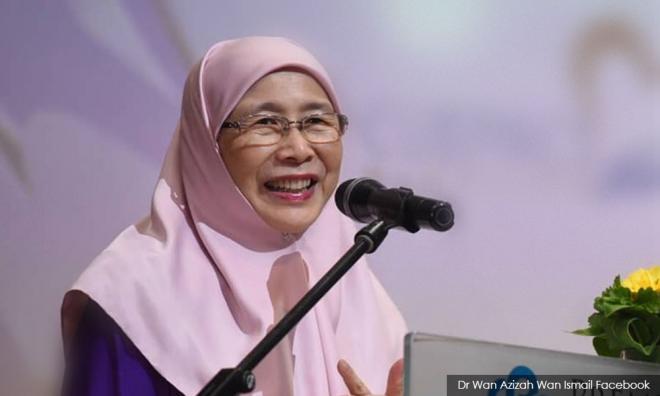 Don't forget PKR's struggles are for the people - Wan Azizah

All PKR members have been reminded by the party’s advisory council chairperson Dr Wan Azizah Wan Ismail that the party's struggles are for the people.

The Pakatan Harapan president, who is also the deputy prime minister, said she wanted the PKR struggle to continue as the party was a result of the sacrifices and services of the people.

"All our struggles are the struggles of the people collectively,” she said in her speech at the PKR 20th anniversary celebration in Seremban last night.

Speaking before thousands of people, Wan Azizah also drew the crowd’s attention to their bitter experience in the past.

'We should stay committed to the struggle'

"I remember at one of the milestones of our struggle, which was the Permatang Pauh declaration, there was an incident when an elderly woman handed me her 50 sen as her contribution towards the struggle.

"I told her it was not necessary... that is why I feel as the people had poured their sweat and tears into the party, we should stay committed to the struggle," she said.

Azmin in his speech said PKR has come a long way from where it had begun.

“From a small party, PKR is now the largest in the Pakatan Harapan coalition. We will continue to believe in our idealism to bring hopes and aspirations to the people," he said.

Earlier, the PKR’s 20th anniversary celebration held at Dataran Rantau started with special prayers and a Yassin recital at the Imam Haji Kahar Mosque in Seremban.

pkr
drwanazizahwanismail
Related Reports
Indie turned away from PKR event after trying to pass manifesto to Anwar
a year ago
Citing reform agenda, Nurul Izzah rejoins PAC
a year ago
'PKR helped to end arrogance, destructiveness of those in power'
a year ago
The party that changed the country's political discourse
a year ago