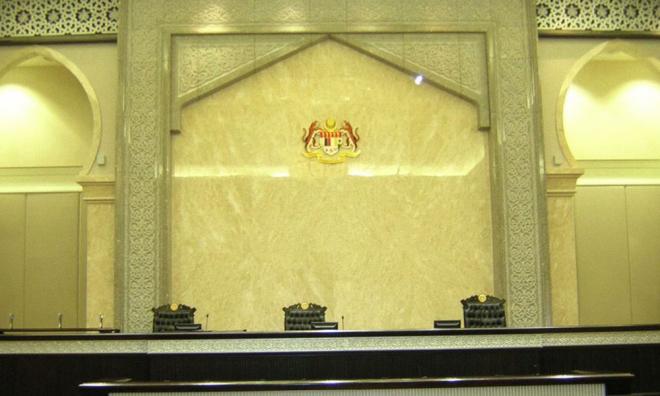 The Federal Court nine-member bench today struck down a provision under the Dangerous Drug Act 1952 (DDA) which allows the use of "double presumptions" to secure the conviction of an accused person charge for drug trafficking.

In a landmark decision, the bench led by Chief Justice Richard Malanjum declared Section 37A of the DDA unconstitutional as it violated Article 5(1) read with Article 8(1) of the Federal Constitution.

Article 5(1) states that no one shall be deprived of his life or personal liberty while Article 8 (1) states all persons were equal before the law and entitled to equal protection of the law.

"We are of the view that Section 37A prima facie violates the presumption of innocence since it permits an accused to be convicted while a reasonable doubt may exist," said Malanjum.

The mandatory death penalty would be imposed on an accused person found guilty for drug trafficking.

Section 37A of the DDA was enacted in 2004 to allow the prosecution to rely on presumptions of "possession and knowledge of the drug" under Section 37 (d) and "trafficking" under 37 (da) of the DDA to secure convictions against drug traffickers.

The section overruled the Federal Court decision in a 1998 case of Muhammed bin Hassan v Public Prosecutor which had held that the use of the two presumptions was unduly harsh and oppressive.

The effect of section 37A, on the operation of the two presumptions was that once the prosecution proves that an accused person had the custody and control of the drugs and the accused is presumed to have possession and knowledge of the drug.

The "deemed possession" is then used to invoke a further presumption of trafficking the drugs.

In his decision, Malanjum said section 37A constituted a substantial depature from the general rule, which could not be justified by and was disproportionate to the legislative objective it served.

He said the application of what may be termed the "double presumptions" under the two subsections gave rise to a real risk that an accused may be convicted of drug trafficking in circumstances where a significant reasonable doubt remains.

The court substituted their respective convictions to one of possession and sentenced Atenza to 18 years jail and Prommatat to 15 years jail respectively for possession of the drugs.

Atenza and Prommatat were ordered to serve the jail term from the date of their arrest respectively on Aug 19, 2014 and July 17, 2014.

Atenza was charged with trafficking 2.5 kg of methamphetamine at the Kuala Lumpur International Airport in Sepang on Aug 19, 2014 while Orathai was accused of trafficking 693.4 grammes of cocaine in a room of the Arena Star Luxury hotel in Jalan Hang Lekiu in Kuala Lumpur on July 1, 2014.

Both women were found guilty by the High Court and their respective appeals were dismissed by the Court of Appeal in 2015 and 2016.