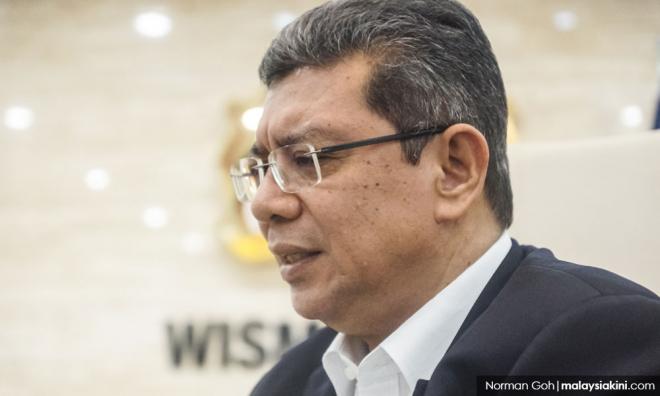 Following Malaysia’s withdrawal from the Rome Statute of the International Criminal Court, two ministers have warned against alleged efforts to overthrow Prime Minister Dr Mahathir Mohamad and the Pakatan Harapan government by sowing fear and propagating falsehoods about the treaty.

Foreign Minister Saifuddin Abdullah reiterated that it had been unnecessary to refer the treaty’s ratification to the Yang di-Pertuan Agong or the Conference of Rulers, because it concerned matters already set in the Federal Constitution and did not require constitutional amendments.

“Unfortunately, certain parties have deliberately misinterpreted the Rome Statute, including the issue of referring the matter to the Yang di-Pertuan Agong or the Conference of Rulers by giving advice or opinions that are inaccurate and ignores facts and rational arguments.

“These parties have also played to emotions by sowing fear to the public and causing confusion and misunderstanding to achieve political goals with the intention of toppling the democratically elected Pakatan Harapan administration and Prime Minister Dr Mahathir Mohamad.

“The Pakatan Harapan administration will continue to hold the principle of constitutional monarchy and defend the Federal Constitution,” he said in a statement today.

He did not name the party who had allegedly sown confusion or ill-advised the rulers.

He emphasised that the cabinet had followed the correct procedure for signing on to international treaties, and this entailed not referring the matter to Parliament beforehand.

Over 100 treaties and international conventions have already been ratified in this manner, he said.

Saifuddin had signed the Instrument of Accession to the Rome Statute of the International Criminal Court (ICC) about a month ago on March 4.

“Those who call him a 'traitor' for signing the Rome Statute and want to remove him undemocratically is (sic) the true coward.

In announcing Malaysia’s withdrawal from the statute today, Mahathir said this is because “people are easily misled on emotional feelings”.

The premier had also claimed that an unidentified party had tried to pit the royalty against the federal government over the statute’s ratification.

"The whole idea is to get royalty in Malaysia to go against the government. That is the motive. Because of that conclusion, we have made a decision not to recognise (the Rome Statute). We have ratified it, but still have time to withdraw.

"It is not because it is harmful to us, but because of the political confusion raised,” Mahathir said.

Deputy Minister in the Prime Minister’s Department Md Farid Md Rafik (photo) further chastised those who are supposedly trying to drive a wedge between the government and the rulers.

“The Yang di-Pertuan Agong and the Malay rulers are the key to unity amongst Malaysia, and any attempt to pit the Conference of Rulers and the government against one another is a despicable act that only serves personal interests,” he said.

He said the government would continue to improve the nation, and its decision to withdraw from the Rome Statute shows that it listens to the people.

Previously, it was reportedly that Wisma Putra had informed Yang di-Pertuan Agong Sultan Abdullah Sultan Ahmad Shah of the government’s intention to accede to the treaty on Feb 15.

However, Johor Crown Prince Tunku Ismail Sultan Ibrahim claimed that the government failed to consult the Conference of Rulers beforehand.

Johor ruler Sultan Ibrahim Sultan Iskandar had said ratifying the treaty would violate the Federal Constitution as it would affect the monarch, Malay rights, and the sanctity of Islam in Malaysia.

Tunku Ismail had cautioned that certain quarters who wanted to dismantle the royal institution might orchestrate war crimes.