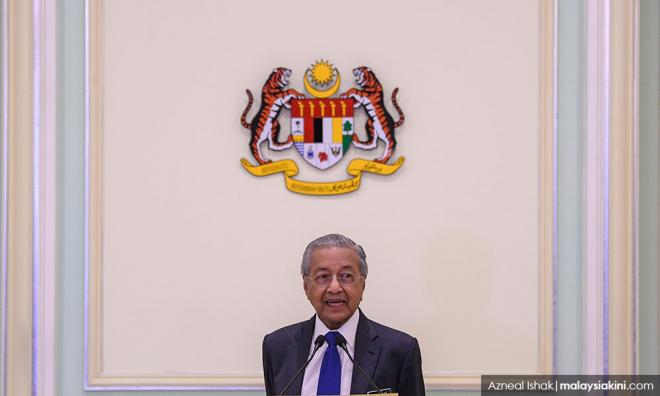 Prime Minister Dr Mahathir Mohamad yesterday announced the cabinet's decision to withdraw Malaysia's ratification Rome Statute of the International Criminal Court, which he said had resulted from confusion over the matter created by a particular person "who wants to be free to beat up people and things like that".

Stressing that the withdrawal was not because the treaty was harmful to the nation, Mahathir claimed that there was an attempt to smear the government's name and to engage the country's royalty to sign an order against him, which move may have involved some members of the royal family.

The full transcript from the press conference where Mahathir spent more than 20 minutes explaining to journalists on the cabinet's decision is reproduced below.

But actually what they are saying is that if we sign this Statute of Rome, we will lose our independence. Our independence to form kita punya own policies, dasar-dasar kita, dan kita punya undang-undang di negara.

But even if we don’t sign, if we do things that are excessive, the whole world will still turn against us.

Excessive bermakna katalah discrimination in favour of the Malays, carried out by seizing all properties of the Chinese and killing the Chinese. That would be excessive.

But what we are doing now is not excessive, because it is meant to ensure that everyone has a share in the wealth of this country.

To distribute wealth in order that everybody benefits from the distribution or from the opportunities in this country.

That is the purpose.

It is not about seizing properties of the Chinese, or Indians, or whatever, and then bunuh semua orang. Itu excessive. That will invite the world, the UN to condemn us.

But even if we don’t sign, they would still condemn us.

Umpamanya kalau di Eropah, mereka percaya bahawa LGBT is okay. But with us it is not okay.

But if we drag all these people and shoot them, or put them in jail, then of course, it is excessive.

But if we say you will be charged in a court of law, and the court will decide, that is not excessive.

And besides that, the Statute of Rome says that if we are unwilling or unable.

Pada masa itu, maka kalau kita accede to the Statute of Rome, they will take action against us because we are not doing something.

But what is it that we are not doing?

We are doing for all cases of crime in Malaysia, everybody is equal before the law.

In other countries, they may decide that it’s okay to smoke marijuana. But not here.

You do that here you will be arrested, tried according to the law, and the UN won’t have any rights to take action against us.

But on the other, hand even if you don’t sign the Statute of Rome, if you do something excessive like you prevent people from being gay and all that by collecting all of them, and lining them before the wall and then shooting them, that would be excessive.

So, it is whether we are willing and able to implement the laws regarding excessiveness, then I think the Statute of Rome would apply.

But when we... kalau kita excessive, sama ada kita sign tak sign pun, the whole world will condemn us. That is the situation.

I know that there is an attempt to try and undermine this government by saying that we have now surrendered all power to foreigners.

We haven’t. There is no way that they can take action against us.

If for example, the previous government Bossku curi duit, and we take action according to the law, there is no way they can interfere.

Even when we produced petition to the raja-raja, signed by one million people, there was no result.

They were hiding I don't know where, but they were worried that action may be taken against them.

But now that we want to have a rule of law, and we won’t take action against them, they bring up this matter.

Trying to blacken the name of this government including myself, and I know why, because I have been very strict about money laundering and things like that.

They can’t possibly come and depose our king because somebody under him, some soldier, might have shot somebody.

I was the one who helped them - the Malays - more than anyone else until I was known as ultra-Malay. But now they are trying to damage that image because they can't make any progress politically.

If you sell land in this country to others because you are looking for money, then we will take action against you.

But having said all that against the Statute of Rome, we understand that this is a political move. A political move to get the rulers to back them up.

Of course, some members of the royal family also may be involved, but the whole idea is to get the royalty in Malaysia to go against this government. That is the motive.

But because of this confusion, and the confusion also among the rulers, we have made a decision that we will not recognise the Statute of Rome. We have ratified it, but we still have time to withdraw, and we will withdraw.

Not because the Statute of Rome is harmful to us, but because of the political confusion raised by some people, including some people who have some political ambition. We know this.

Jadi kita punya keputusan kabinet this morning is that we will withdraw our ratification of the Statute of Rome kerana confusion, bukan kerana we believe it is going to be bad for us but because of the confusion created by one particular person who wants to be free to beat up people and things like that.

And if he beats up people again, I will send the police to arrest him, I don't care who he is.

That is the move that is being taken in order to blacken the good name of this government.

So, while we will withdraw our ratification of the Statute of Rome, it is not because we think it is harmful to our country, but it is because of the politics of this country where sometimes people are easily misled by resulted emotional feelings, that what we are doing is against our own interest.

So that is the true reason I have to explain to you.

And I would like to say this of these cowards, who during the last regime saw Najib stealing money, doing all kinds of things, and they said nothing. There were a lot of cowards who want to benefit from Najib's misrule so that they also can benefit.

I am saying this directly at them. Who they are, you can guess. But that is the reason why they were silent then, but sekarang ni wah bukan main lagi jaguh nak pertahankan hak orang Melayu, kononnya.

Okay any other question you may have?

Question: You said this a cabinet decision, but you sound very angry and upset that this decision has to be made. Why are you very upset?

Mahathir: Because I see this as a way to blacken my face because they know that they cannot oust me very easily.

So they have to paint a black picture of me. This is like old times, you know when I was called maha zalim, maha this maha that, but now they accept me as their leader. Because in politics that happens.

For that, I think I will have to tell them in their faces - through you of course - that they are not going to do it.

It's not because we are afraid of them, but because they make use of this politics on people who are ignorant.

Question: The way you describe this person that is against the signing of the Rome Statute, is this a certain prince from a southern state?

Mahathir: You can make your guess, you are welcome.

Question: Why did the cabinet not seek approval from Parliament first before signing to ratify the Statute of Rome? Wouldn't it be good, then you can avoid all this?

Mahathir: No, the thing is that we see no harm in this (ratification of the Rome Statute). It is a normal thing, and we are not going to be excessive in the exercise of power of the government.

And in future also they will be prevented from doing this thing because we have signed this statute.

But on the other hand, believe me, if you do something wrong the whole world will jump on your back.

I am not seeing anything being done here.

The previous government, yes, arrested people under fictitious law, and then find there is no case, then because they lost we are able to brush aside their decision.

Mahathir: We must study what the law is all about, what does it subject us to, and if we find that this agreement will not do us any harm, we do not have to go around telling everybody.

The government has the authority to approve and to sign treaties, that is our right.

I don't think we have to debate everything in public because we debate in public, there will be differences in opinion versus our opinion, and we cannot make a decision.

Question: Is this a collective decision by the cabinet?

Mahathir: Yes, that is the cabinet decision.

Question: Does it mean the International Criminal Court cannot hold us accountable when we do something like ethnic cleansing?

You see what's happening to the Rohingya. The blatant massacre of people in Rohingya, pushing them out to sea, killing them through drowning, hundreds of thousands of them.

It won't happen. But, the fact is that, if there is no such threat, rulers, members of the government of this country might abuse the law, might be excessive, like the previous government.

But as you know the previous government, when it was excessive, beyond reporting all over the world, what did it do? Nothing.

We had to overthrow the government through the election. I have made a petition to the rulers, one million people signed that petition, but nothing happened.

And the foreigners do not say anything about that. In fact, they were quite happy to receive Najib and play golf with him.

They cannot stop us from having our own ideas.

Yes, in the West, of course, they think that LGBT is great, but in this country, it is not great.

But if you are like that, don't come and flaunt all over the country saying I am a member of LGBT, you see.

But you do that, you offend people, then we have to take action against them.