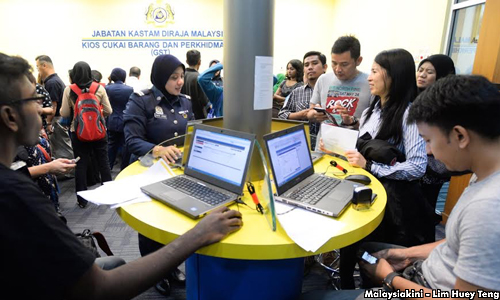 Yoursay: Najib, we taxpayers are fuming too

YOURSAY | 'Even if RM2.6 billion was a Saudi donation, there is still RM1.4 billion of unaccounted riches.'

Cogito Ergo Sum: Former prime minister Najib Abdul Razak taxed the rakyat’s back sore, while he did not pay his own. As a finance minister who devised and engineered some very harsh taxes, this man has failed to follow his own harsh rules.

The people need your tax money and all the monies you allegedly stole from them to get back on the road to recovery.

Ipoh PP: Here is an example. Say, I own a property worth RM1 million. I donate it to my son for “love and affection”.

Still, I have to pay tax as the property will be assessed on the market value and a portion of tax (stamp duty) will have to be paid although it’s a donation.

So what is this alleged thief talking about? Same analogy, man. Collect the tax money and if the bloke can't come out with it, send him to Hotel Bamboo.

RZee: We are fuming, too. Najib’s fuming is of no consequence. The taxman should retrieve every single sen to be paid by Najib, who thought he was untouchable.

Palmyra: When you tell too many lies, one lie to cover another lie, you may land yourself in trouble. Sooner or later, the truth will catch up with you.

It is no joy to receive a letter of demand from the taxman. So with most accounts frozen, where can you dig the money to pay the Inland Revenue Board (IRB) their dues?

Hplooi: The next step would be to caveat all his properties and bank accounts; including those we can identify overseas.

The International Convention on Money Laundering is operationalised by the United Nations (UN) and the International Monetary Fund (IMF) under the Financial Action Task Force (FATF). Malaysia is a member since 2016.

Member countries will be obligated to assist Malaysia in identifying and blocking stolen funds (money from crime is covered under FATF).

Roger 5201: Even if RM2.6 billion was a Saudi donation, there is still RM1.4 billion of unaccounted riches (according to IRB, Najib did not declare income of about RM4 billion between 2011 and 2017).

How can someone with a mere salary of RM22,826.65 a month possibly owe the IRB some RM1.5 billion over six years?

Wira: Najib, foreign income (regardless donations or otherwise) brought into this country is, of course, subjected to tax.

You need to explain too why the money went into your bank account and where they went after that. Show us the money trail with documentary proof.

No one is buying your cock-and-bull story anymore.

Tpn: "I will provide the proof," said Najib.

This statement has been going on for years. Where is the proof?

Anonymous 350791436750385: If he cannot pay the tax by a given time, pile it up further by charging him interest on the amount owed, as is the case for all tax defaulters.

NNFC: How many other Umno warlords have benefited from the 60-year rule, and evaded paying tax on dubious incomes?

Look no further than those caught with millions in cash and valuables. Of course, we should be aware that they could not possibly deposit their unexplainable black money into a bank account.

The country would be rich if not for these crooks.

FlabberPro: And the man continues to cry "political vengeance" by the incumbent government.

He will then go around soliciting sympathy that he is a victim of political persecution, in which he has been denied the right to reply.

Najib continues to cry innocence despite the glaring worldwide evidence. He fools the illiterate and continues his foolish propaganda online.

He is really a man who knows no shame.

FairMind: Mr Tax Expert (Veerinderjeet Singh), why are you singing to the tune of Najib?

“Donation” is the word used by Najib. This case was investigated under AMLA (Anti-Money Laundering Act).

Donation is merely the facade used by Najib to disguise stolen money laundered through a complex laundering process.

Moreover, the laundered money that goes into one’s bank account is allegedly stolen money from several phases from 1MDB.

Embezzlers, thieves, and the like are forced to report their ill-gotten gains as income for tax purposes; they may also take deductions for costs relating to criminal activity.

Anonymous_s: No special treatment to and for any wrongdoers - go by the book, pay up first then appeal, or else go to jail in lieu.

Unless one is a learned tax expert, all the I say is ‘they say, he says’ are just noises aplenty.