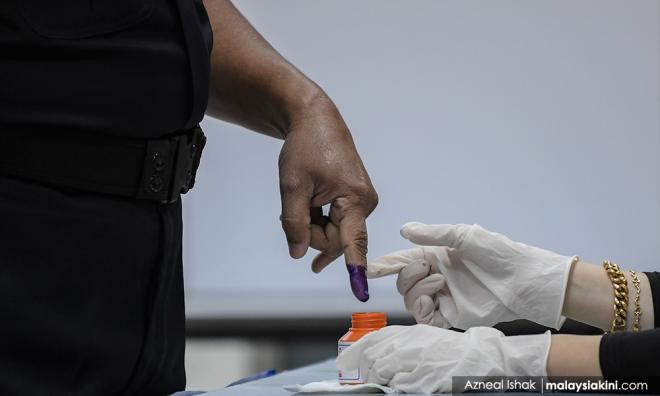 RANTAU POLLS | A total of 110 of the 118 early voters in the Rantau state by-election will cast their ballots tomorrow, according to the Election Commission.

Seventy-four of the early voters, comprising military personnel and their spouses, will vote at the Sendayan air base, and 36, made up of police personnel, will vote at the Rantau police station, EC chairperson Azhar Azizan Harun said in a statement today.

“The remaining eight early voters, all military personnel, are voting by post,” he said.

Azhar added that the two polling stations will open at 8am and close at noon.

After the early voting, he added, all the ballot boxes will be kept at the police station lockup, and will be opened for the counting of the ballots on Saturday at the vote-tallying centre at SJKC Bandar Sri Sendayan.

According to the EC chief, the early voting will be witnessed by the agents of the contesting candidates and observers comprising representatives of organisations and NGOs appointed by the commission.

He also said that the early voting will be streamed live on the EC Facebook page.

The April 13 Rantau polls will see a four-cornered contest between Dr S Streram of Pakatan Harapan, Mohamad Hasan of BN, and two independent candidates, R Malar and Mohd Nor Yassin.

The by-election was necessitated by the dismissal of Mohamad's appeal to set aside the Nov 16 Seremban Election Court decision declaring his unopposed victory in last year's general election null and void.

In GE14, Mohamad was declared the winner of the seat after Streram was prohibited from entering the nomination centre to submit his nomination papers because he did not have a pass issued by the EC.