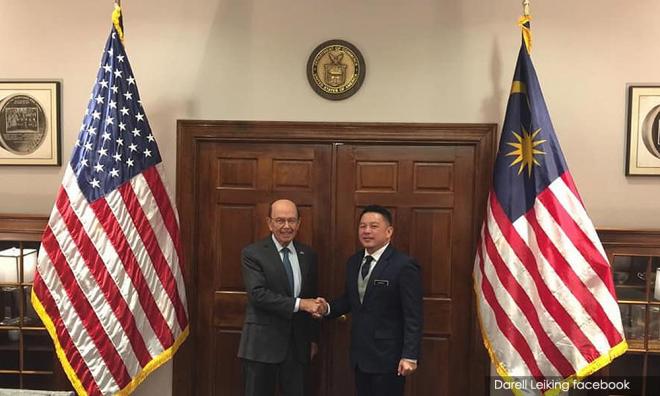 Ministry sees trade mission to US generating RM6.6b in investments

The trade and investment mission to the United States led by International Trade and Industry Minister Darell Leiking is expected to generate potential investments worth RM6.6 billion.

In a statement today, the International Trade and Industry Ministry said the investments would mainly be in key projects within the electrical and electronics and chemical sectors.

The mission, which was held from April 1 to 6, was co-organised by the Malaysian Investment Development Authority (Mida), Malaysia External Trade Development Corporation (Matrade) and InvestKL Corporation.

According to the ministry, high-level meetings were also held with potential US investors in the manufacturing and services sectors, such as chemicals, electrical and electronics, aerospace, tourism, support services for business aviation, as well as a centre of excellence for financial services.

During the mission, the minister was also interviewed by several international media agencies, in which he expressed that both the US and China had a global responsibility to resolve their differences amicably, as their actions would impact all economies and the global supply chain.

Other than that, the ministry said specific discussions on potential investments in data centres were also held during the mission, with Microsoft Corporation and Mimos Bhd agreeing to establish the Centre of Artificial Intelligence for Future Industry in Malaysia.

In conjunction with the mission, a seminar themed 'Forging stronger economic relationships between Malaysia and the US' was also organised in San Jose, which attracted over 150 participants in the manufacturing and services sectors.

The seminar provided an update on the current economic situation and highlighted investment opportunities and potential business cooperation available in Malaysia, it added.

"The minister also had the opportunity to network with successful Malaysian professionals based in the Silicon Valley, as well as witness the exchange of a memorandum of understanding on collaboration and development of professional programmes in the areas of AI, Internet of Things, robotics, blockchain and financial technology."

international trade and industry ministry
darell leiking
trade
economy
Related Reports
Daim: I will continue to advise PM, gov't, as and when needed
22 Jan 2019
M'sia's inflation rate to average between 1.6 and 2pct this year - Guan Eng
1 Feb 2019
US, China can reach trade deal 'we can live with': US Commerce secretary
8 Jan 2019
Trade wars cost US, China billions this year
30 Dec 2018