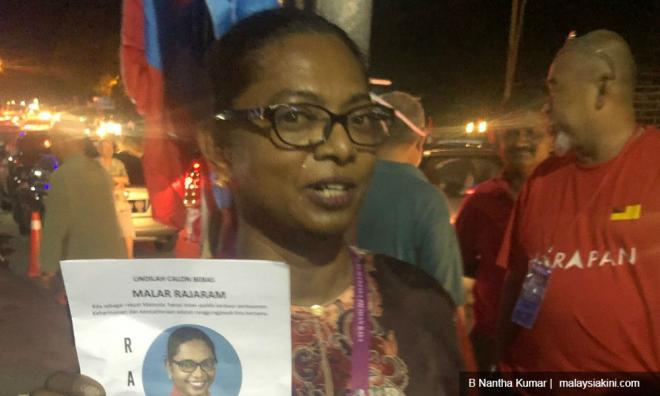 Independent candidate Malarvizhi has no regrets contesting in Rantau

RANTAU POLLS | R. Malarvizhi (above), the independent candidate in the Rantau state by-election said today she has no regrets contesting the by-election, polling for which is on April 13.

“This is the first and last time I am contesting. If I win, I will serve the people. If I lose, that’s it.

“I told the people of Rantau that I want to serve them. It is up to the voters if they want to accept me or not,” she said when campaigning in Bandar Sri Sendayan here.

Malarvizhi said that though the voters had generally responded well to her, it was disheartening that some are afraid to approach her, while some just stare at her from afar.

Housewife Malarvizhi, once a radio presenter in Toronto, Canada, for 25 years, said that so far she has not received any contribution from the public, although she has been distributing her calling card with her bank account number on it, but added that she was not disappointed about that.

“I stand alone contesting in this by-election. I will do what I can to the best of my ability. If anyone wants to help, they are welcome. If not, it is okay,” she said.

As the campaign enters the second week, no posters or buntings of Malarvizhi are to be seen along the main roads. She moves alone on her campaign trail, distributing pamphlets of her manifesto to the voters.

The Rantau by-election, polling for which is on April 13, is a four-cornered contest among anaesthetist Dr S. Streram of Pakatan Harapan (PH); Umno deputy president and former Negeri Sembilan menteri besar Datuk Seri Mohamad Hasan of Barisan Nasional (BN); Malarvizhi and another independent candidate, Mohd Nor Yassin, a former lecturer.

The by-election has been necessitated by the Federal Court dismissal of an appeal filed by Mohamad to set aside the Nov 16 Seremban Election Court decision declaring his unopposed victory in the 14th General Election (GE14) null and void.