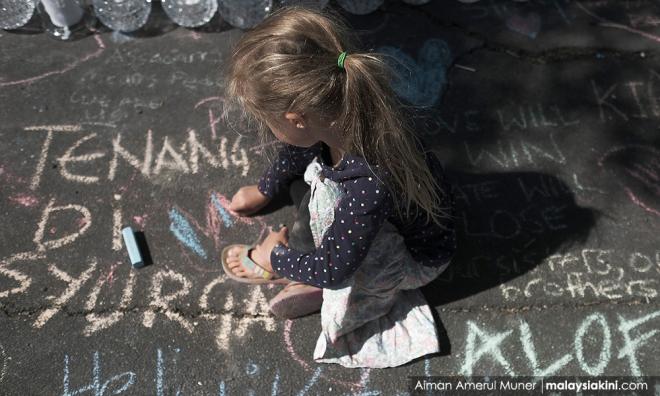 On a small farm on the outskirts of Christchurch in New Zealand, Omar Nabi digs a small hole and sharpens a knife as he prepares to slaughter a sheep as a blessing to his father – a victim of the mass killings at the Al Noor mosque.

Hunched between his father’s collection of rusted cars, Nabi softly said a prayer and slit the animal’s neck, facing it towards Mecca. He removed the pelt and prepared the meat for cooking. Blood was pooled in a hole where he plans to plant a tree..

Nabi first slaughtered a sheep when he was 11, each step supervised by his father. Nabi is now 43.

“My father was my whole life... I give thanks for my father, he’s done a lot,” he said. His father, Haji Daoud Nabi, had hoped to build a small mosque on the property, a plan his son intends to complete. “This means a lot to me, Dad put a piece of heaven in Christchurch.”

Several weeks after an attack on Muslim worshippers that killed fifty people and left dozens wounded, the lives of survivors and the families of victims have changed irrevocably. Some survivors feel emboldened, others are haunted by memories of the attack and haven’t been able to return to the mosque.

Burying loved ones brought relief to many families, but reminders of their losses are never far away, from an empty seat at a dinner table to the prospect of Ramadan celebrations in a few weeks.

The shootings on March 15 shook New Zealand and prompted the government to tighten gun laws and launch a national inquiry into the country’s worst peacetime massacre. An Australian man (below), a suspected white supremacist, has been charged with 50 murders and 39 attempted murders.

Survivor Mark Rangi, 59, feels his future is in limbo following wounds to both legs. The New Zealander, who lives in Sydney, had never been to Al Noor Mosque before the attack.

After visiting relatives in a nearby town, he had attended the mosque before his return flight to Sydney so he could seek spiritual guidance on the direction of his life.

Instead, he ended up running for his life, bleeding heavily from shrapnel wounds in his legs. After surgery, he is able to walk slowly, but Rangi is doubtful he can return to work as a baggage handler in Sydney.

“I wouldn’t have a clue (what to do now),” he said from a youth hostel where he is staying, overlooking piles of flowers placed in a makeshift memorial. “I’m very lucky that I didn’t get injured worse, so I’m grateful for that.”

In a one-storey house a short drive from Al Noor mosque, Zahra Fathy turned pages in a photo album compiled by her husband Hussein Moustafa, who died in the massacre. As part of the customary four-month and 10 day-mourning period, she wears simple, unadorned clothing and spends most of her time at home.

“It’s hard to stay thinking about what happened, so I have to escape this and think about what’s next,” she said.

Her husband had spent time at the mosque on most days, organizing its library of religious texts and tending to a vegetable garden, which provided the community with pumpkins, rocket and broccoli.

She is now considering visiting her extended family in Alexandria, Egypt, where she and her husband both grew up, for Ramadan.

“Being on your own during Ramadan is tough,” said her son, Mohammed, who flew home from a new job in Saudi Arabia on learning of his father’s death.

After some trepidation, Mohammed worshipped last Friday at the Al Noor mosque for the first time since his father’s death.

“I’m praying in the same area, the same corner that my dad used to pray. I wanted to do that,” he said. “It was a bit emotional at first, I got a few tears, it was tough. I kept imagining him next to me, I kept looking around, looking for the bullet holes.”

Before Ramadan, Zahra and her family plan to mark the graduation of her youngest son, Zeyad, 22, who also returned to Christchurch from a new job, in Canberra. “He was very proud of you,” Zahra told her son.

The family had an active WhatsApp messaging group to stay in touch. Now, the WhatsApp group is not so active.

“It feels like something’s missing… It’s hard to explain. It just feels weird if we use it,” Zeyad said.

In a sleepy Christchurch suburb where he owns a homeopathy business, Farid Ahmed (below) has worked to bring his community and his country together. Farid, a wheelchair user, survived the shooting, but his wife Husna was killed.

He spent one recent Sunday going door-to-door to thank his neighbors for their support.

When his neighbors heard of his wife’s death, “they came running... they were in tears,” he said. “That was wonderful support and expression of love.”

His message of forgiveness and peace to avoid “a heart that is boiling like a volcano” made headlines around the world and was broadcast in a heartfelt speech at a national memorial service.

“I admire him. I couldn’t do that,” said a neighbor, a Christian who lives four doors down. “We’ve learnt a lot about Islam over the last few days… (it’s) crazy how similar our two faiths are.”

Across the city, survivor Sardar Faisal has thrown himself with vigour into helping co-ordinate dozens of volunteers who prepare meals and run errands for the widows of victims of the attack. As a result, he realized he was not spending much time with his own wife and young children.

“Maybe it’s survivor’s guilt, maybe it’s empathy because whenever I visit the affected families, the only thing I think about is that they were being shot, the bullets that I heard,” he said over tea at a friend’s house.

On the day of the shootings, Faisal was late to the mosque, an uncharacteristic trait that possibly spared his life. When the gunman burst in and started shooting worshippers at prayer, Faisal was in the bathroom, about to wash in preparation for prayer and so was able to hide from the gunman.

What he saw and heard that day haunts him, he said. He struggles to focus at work and suffers nightmares as deadly scenarios run on repeat through his sleep.

Alongside sorrow and pain, others feel the close call has reinvigorated their lives.

“It gave me courage,” said Hazem Mohammed, originally from Baghdad, who played dead in Al Noor mosque as the gunman stood over him, wounded and surrounded by the bodies of fellow worshippers.

“I cry for two reasons. The first because I lost friends, they are gone,” he said. “And the other tears… these tears are for joy, because I was reborn again on Friday the 15th of March 2019.”

new zealand
christchurch
muslim
Related Reports
Chirstchurch shooter to face 50 murder charges
a year ago
Silence and tears: Reporting the massacre in Christchurch
a year ago
Australia's Senate condemns lawmaker over NZ massacre Muslim comments
a year ago
Before mosque attacks, NZ failed to record hate crimes for years
a year ago