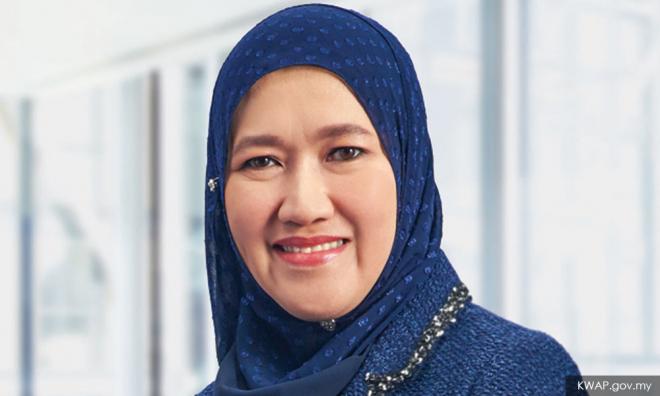 The National Audit Department has found that the Armed Forces Fund Board (LTAT) has failed to report the impairment for two "available for sale securities" amounting to RM88.90 million in its financial statements ended Dec 31, 2017 (FY17).

In a statement today, LTAT chief executive officer Nik Amlizan Mohamed (above) said the fair value for the two shares as of FY17 amounted to RM18.46 million compared with the purchase cost of RM107.36 million.

"Significant or prolonged decline in fair value below cost is a consideration to determine impairment for these two shares," she said.

Meanwhile, Nik Amlizan said the findings from the department also showed that the fund’s revenue for FY17 included proceeds from a sale pertaining to property development amounting to RM202.71 million, which should not have been taken into account in its FY17 financial statements.

"The findings clearly indicated that two transactions that took place were a result of lapses in complying with the Financial Reporting Standards," she said.

As such, she said the impact from these findings had caused LTAT's profit for FY17 to be reduced to RM370.56 million from RM662.17 million.

Nik Amlizan said LTAT was also of the view that with the finalised audited accounts of FY17 being in negative territory for its retained earnings, this would have a profound impact on its FY18 results.

"The delay in FY18 accounts is due to the late submission of FY17 accounts, and we are in the midst of finalising our accounts for FY18 and we expect to announce our results by July 2019," she said.