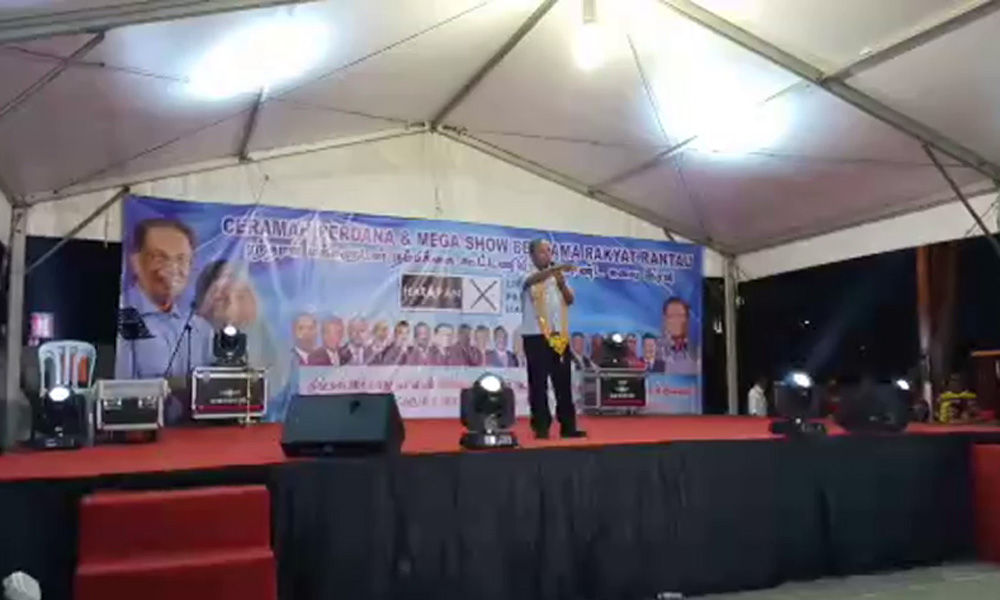 KJ needles Kulasegaran on 'our race must vote Streram' ceramah

RANTAU POLLS | A video of Human Resources Minister M Kulasegaran's ceramah in Tamil, appealing for the Indian community's votes in tomorrow's Rantau by-election, has caught the attention of Khairy Jamaluddin.

Tagging the DAP lawmaker, he tweeted: “I hope the translation is incorrect.”

In the 58-second clip, which has Malay subtitles, Kulasegaran tells the audience that he would be embarrassed if Indian voters do not vote for Pakatan Harapan candidate Dr S Streram.

“Where will I put my face if my people, my community... Streram who is of our community, we are of the same blood, what will happen if we do not support our own community.

“What can we tell the cabinet? 'Those fellows' will say, 'Dei, he (Umno acting chairperson Mohamad Hasan) is of a different race, different religion, but the Tamils (Indians) voted for him. Think carefully (about this).

“...When I am a minister, so many problems (facing the Indian community) can be brought to Chinese ministers, Malay ministers, but they (the Indians) don't go (to ministers of other races).

“This is because they (Indians) feel happy when they go to a Tamil (Indian) minister,” he added.

Kulasegaran also spoke about how he preferred to eat at Indian restaurants during his trips to Rantau.

“I have come to Rantau so many times, there are so many Chinese shops, so many Malay shops, but I do not like to eat (in these places)...

“We go to Tamil (Indian) shops. Why? Because this our community,” he added.

Malaysiakini has verified that the Malay translation of Kulasegaran's speech is accurate.

According to the video, the minister was speaking at Harapan's ceramah in Bandar Ekar last night.

Responding to the video, some Twitter users pointed out how BN politicians also used the race card to fish for votes.

This led several others to argue that Harapan often criticised BN for doing this but is now employing the same strategies.

Apart from Streram and Mohamad, the battle for the Rantau state seat also involves two independent candidates R Malarvizhi and Mohd Nor Yassin.

In the last general election, Mohamad, who is a three-term Rantau assemblyperson, retained the seat uncontested after the Election Commission barred Streram, his sole challenger, from filing his nomination papers.

Streram subsequently filed an election petition, which led to the courts ordering that a by-election be held.

Indians make up 27 percent of the voters in the constituency.