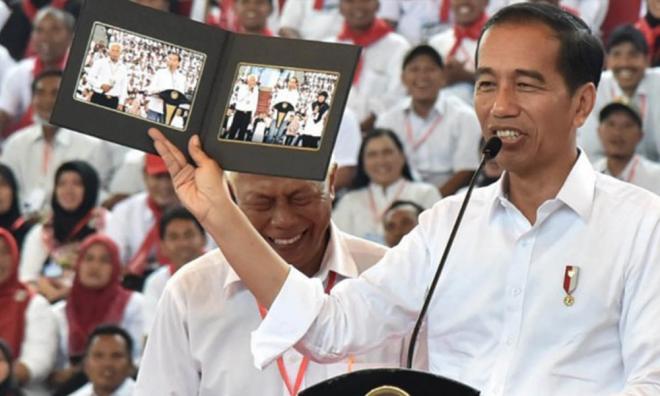 When Indonesian President Joko Widodo was elected five years ago, the former furniture salesperson seemed to offer a clean break from the military and political elite that had clung to power since the fall of strongman ruler Suharto in 1998.

Now, Widodo, 57, is running on his own record for a second term, with a comfortable lead in most opinion polls over his rival, former general Prabowo Subianto.

With his easy smile and signature “blusukan”, or spur of the moment neighborhood walkabouts, he came to power on a wave of popular support for the clean, can-do image he cultivated as a small-city mayor, and then as governor of the capital Jakarta.

Still, during his political rise, Widodo, a moderate Muslim from Solo in Central Java, has had to fend off smear campaigns suggesting he is anti-Islam, a communist or in debt to China, all damaging accusations in the Muslim-majority country.

As president he was saddled with high expectations that he could fix a host of enduring issues in the sprawling archipelago, from tackling past human rights abuses to rooting out pervasive graft.

Jokowi, as he is popularly known among Indonesians, also inherited an economy coming off a commodities boom, and faced an obstructive parliament and vested interests opposed to reform and transparency.

Still, he methodically stitched together a majority in Parliament and while unable to deliver on an economic growth target of seven percent, he led a record infrastructure push to build ports, roads and airports.

Niken Satyawati, a family friend who has co-written a book on the president, said Widodo had sought to extend the clean governance he pursued as mayor of Solo to the national stage.

“He was an ordinary person. And he still is,” she said, describing his weakness as a desire to accommodate the wishes of too many people.

Widodo came from humble beginnings. His father ran a small timber business and his childhood home was a riverside shack in the city of Solo.

He was the first in his family to attend university and after graduating in forestry eventually set up a successful furniture business.

Widodo became Solo’s first directly elected mayor in 2005 and was hugely popular after cleaning up the streets and public spaces with incentives and persuasion to shift thousands of illegal vendors to new facilities.

His consultative approach would come to define his campaign as he ran for governor of Jakarta in 2012.

Once president, as a political outsider, he faced accusations of being beholden to party backers, particularly those connected to the Indonesian Democratic Party of Struggle, led by former president Megawati Sukarnoputri (above).

Nevertheless, he focused on reviving the economy by cutting red tape and easing investment rules. At times, he faced cabinet infighting and policy flip-flops cast doubt on his ability to commandeer his own team, let alone a country of 260 million.

On the foreign stage, he appeared more assertive, denying pleas for clemency in 2015 from foreign drug traffickers on death row, straining ties chiefly with neighbor Australia.

He also held a cabinet meeting aboard a warship off the Natuna Islands after China stated its “overlapping claim” to nearby waters.

The most bruising period of his presidency was from 2016, when huge rallies targeting Jakarta’s ethnic Chinese, Christian governor for alleged blasphemy pushed religious tension in Indonesia to its highest in years.

Widodo was forced to distance himself from Basuki Tjahaja Purnama (above), a one-time ally later jailed for insulting Islam.

To the disappointment of some progressive supporters, Widodo picked Islamic cleric Ma’ruf Amin as his running mate for the election, seeking to boost the ticket’s appeal to Muslims.

If he is re-elected, analysts expect broadly the same economic policy focus, though they are divided whether he will quicken the pace.

“If he wins, I believe he will push his reform agenda more confidently, as politically he is a ‘stubborn’ leader,” said Wawan Mas’udi, a politics expert at Gadjah Mada University who has charted Widodo’s rise to power.