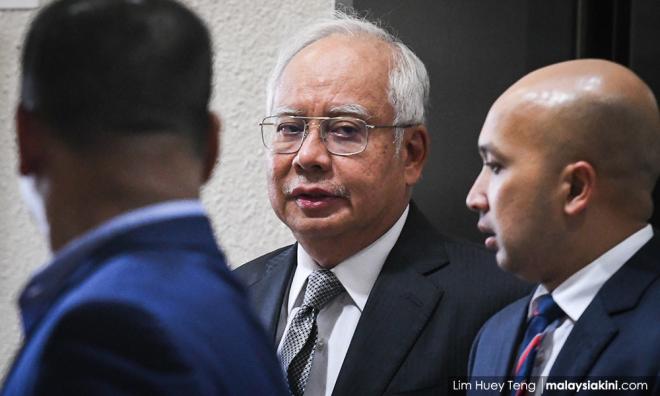 4.45pm - Thank you for following our live report today.

4.20pm - Najib leaves the court complex smiling together with some 10 supporters.

When reporters ask him about the proceedings, he replies: “I do not wish to comment, ask our lawyers.”

Court-appointed DPP V Sithambaram informs the court that the process of photocopying the documents needed by Najib's defence is taking longer than expected.

"The photocopying is taking longer than expected and may even stretch to 5pm,” he says.

Najib reads as he waits for trial to resume

3.15pm - As he waits for the proceedings to resume, Najib reads a book. Amidst the chatter in the public gallery, the former premier remains engrossed as he flips the pages.

The accused's counsel Harvinderjit Singh says their documentation was a bit "jumbled up" while the prosecution's one was better arranged.

This is a day after Azizul carried out a raid at an Ambank branch at Raja Chulan, KL, whereby he confiscated documents on the opening of bank accounts by Najib, SRC International and Gandingan Mentari.

1pm - Najib exits the court complex towards his car. Around 10 supporters are seen waiting for Najib outside the complex lobby.

Najib smiles and shakes hands with one of his supporters before entering his car.

The hearing will resume at 2.30pm.

During examination-in-chief by DPP Suhaimi Ibrahim, the 41-year-old says that he was the raiding officer during the raid, which netted eight sets of documents related to the account openings by the accused Najib Abdul Razak, SRC International, and Gandingan Mentari.

Azizul: I was appointed as the raiding officer by (Bank Negara's) investigating officer Farhan Shahrudin over suspected offences committed under Amla (the Anti-Money Laundering Act).

Suhaimi: Where did you conduct the raid?

Azizul: At an Ambank branch at Raja Chulan, KL.

Suhaimi: Why were you ordered to carry out the raid at Ambank?

Azizul: To aid investigation under Amla based on a report. I went with three other Bank Negara officers.

Suhaimi: Who did you meet at the Ambank branch?

Azizul: I met R Uma Devi, the manager of the Ambank branch at Raja Chulan. I informed Uma Devi orally of the list of accounts that are sought for a probe by Bank Negara. She then came back with several troves of the documents.

Suhaimi: Then what else did you do?

When Suhaimi asks how many sets of documents were seized, Azizul says there were four sets of documents, which dealt with bank account openings from 2011 to 2015, involving Najib, three linked to SRC International and one involving Gandingan Mentari.

Najib's counsel Harvinderjit Singh applies for a short recess to allow the defence to go through the sets of documents.

12.30pm - Akmaludin, is released from the witness stand after cross-examination and re-examination.

The prosecution calls its second prosecution witness, Azizul Adzani Abdul Ghafar, who is an executive at Bank Negara Malaysia.

Azizul was part of the Bank Negara team which raided the Jalan Raja Chulan Ambank branch in the capital in 2015.

12.15pm - Companies Commission of Malaysia (SSM) assistant registrar Muhamad Akmaludin Abdullah testifies that his knowledge on the companies registered with the commission is only based on what he had seen in their documentation.

During re-examination by DPP Suhaimi Ibrahim, the first prosecution witness says that as a result, he does not have personal and specific knowledge on the nature and activities of company filings with SSM.

Suhaimi: How many companies have been registered with SSM (since the witness began working with SSM)?

Suhaimi: Do you have specific information and knowledge on the companies registered with SSM?

Suhami: In your statements today (during cross-examination by Najib's counsel Harvinderjit Singh), it is not from your own knowledge but based on what was stated in the documents (filed with SSM)?

Earlier, during Harvinderjit's cross-examination, Akmaludin gave a series of answers that alternated between "Yes" and "I do not know" in regard to filings by SRC International with SSM.

Harvinderjit's line of questioning is focused on SSM filings by SRC International, which seems to show a delay in their filing whereby the date of the documents are at least a month from when they were filed with SSM.

Among the questions are in those in regard to a purported discrepancy over filings relating to an alleged 2015 meeting by SRC International's board of directors which led to the transfer of 999,998 shares from the company to 1MDB Energy.

Harvinderjit contends that the defence' stance is that there is no such resolution by the company dated August 2015, among others.

11.13am - The proceedings stop for a short break after Muhamad Akmaludin Abdullah is cross-examined by Najib's counsel Harvinderjit Singh.

Harvinderjit questions the witness on the apparent incongruity of 999,998 SRC International shares being transferred to 1MDB Energy a few months before documents were received by the Companies Commission in August 2011.

Proceedings resume at 11.27am.

9.43am - Proceedings resume, with DPP V Sithamabaram informing the court that the prosecution has no objection to the defence's application to view the three documents related to SRC International.

Judge orders trial to stand down

9.23am - Judge Mohd Nazlan Mohd Ghazali orders a temporary stand down of the trial to allow the defence to view documents they had previously asked the first prosecution witness Muhamad Akmaludin Abdullah to produce.

Earlier, DPP V Sithambaram asked the court whether it was necessary for Akmaluddin to produce the three documents.

During cross-examination on the first day of the trial, defence lawyer Harvinderjit Singh (below) had asked Akmaludin whether he could produce the documents.

These include the Companies Commission list of documents lodged on SRC International, a search document on Yayasan Rakyat and a document detailing the particulars of the foundation.

Sithmabaram tells the court that the court's direction is necessary to ascertain whether the documents are relevant.

Harvinderjit counters that it is necessary for the defence to look at the documents first to determine their relevance.

"I have not come to the stage of whether the documents are relevant or not as I have not seen it yet. These are all just public documents.

"Before we can talk about admissibility, the documents must be shown to us first, then they can be entered as public documents.

"My learned friend (Sithambaram) is jumping the gun. He can also view the documents and we take it from there," the defence lawyer says.

Ex-PM in the dock

9.13am - Najib puts away his book and enters the dock as High Court judge Mohd Nazlan Mohd Ghazali enters the courtroom to begin proceedings.

Najib reads 'World Without Walls' while waiting for trial to start

9.03am - Clad in a black jacket, Najib enters the courtroom and sits in the front row of the public gallery. He is seen reading a book as he waits for the proceedings to start.

The book is called Dunia Tanpa Tembok (World Without Walls) by Ayman Rashdan Wong, who writes that “knowledge is power,” “language is symbolic” and “geography is fate.” The three phrases, he adds, can bring down the walls which separate humanity.

Minutes earlier, his lead defence lawyer Muhammad Shafee Abdullah entered the courtroom and greeted the rest of the defence team.

9.01am - Najib arrives at the KL High Court in a black Proton Perdana.

The ex-premier greets the reporters stationed outside as he enters the court complex.

AG arrives at the High Court

8.52am - Attorney-general Tommy Thomas enters the KL High Court to lead the prosecution in today's SRC International trial against Najib.

The ex-premier is facing three counts of criminal breach of trust under Section 409 of the Penal Code, and one count of abuse of power under Section 23 of the MACC Act 2009 over funds amounting to RM42 million linked to SRC International, a former 1MDB subsidiary.

Najib, who was also the finance minister and adviser emeritus of SRC International, is also facing three money laundering charges under Section 4(1)(b) of the Anti-Money Laundering, Anti-Terrorism Financing and Proceeds of Unlawful Activities Act (AMLATFA) 2001.

If convicted, the Pekan MP can be sentenced up to 20 years' jail, whipping and fine for the CBT charges; 20 years' jail and a fine not less than five times the amount involved or RM10,000, whichever is higher, for the abuse of power charge; and 15 years' jail, and a fine up to RM15 million or five times the amount involved, whichever is higher, for the money laundering charges.

The trial will kick off with the resumption of the defence team's cross-examination of the first prosecution witness, Registrar of Companies deputy registrar Muhamad Akmaludin Abdullah.

On the first day of Najib’s trial, Akmaludin testified that he had received a request from the MACC to run checks on records of three companies, namely SRC International, Gandingan Mentari and Ihsan Perdana.

Meanwhile, Najib will be represented by a 13-person defence team led by veteran criminal lawyer Muhammad Shafee Abdullah (above).