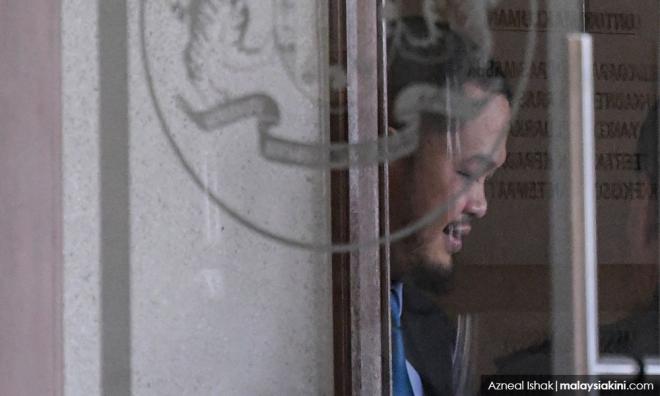 6.00pm - Thank you for following our live report today.

5.05pm -  Proceedings for Najib’s SRC International trial have ended today, and will resume at 9am tomorrow before Justice Mohd Nazlan.

Nizam, the prosecution’s third witness, is set to be cross-examined further by Najib’s defence team tomorrow.

Earlier today during cross-examination, Nizam, who is an analyst with Bank Negara’s Financial Intelligence Department, said that he arrived at Affin Bank’s office on Jalan Raja Chulan, Kuala Lumpur, at 10am on July 6, 2015.

Nizam said that he had handed a notice under section 37 (1) of Amlatfa to the bank’s chief legal officer and company secretary, Nimma Safira Khalid.

He had previously said during today's proceedings that upon giving Nimma the notice, he was provided with bank account documents in relation to Ihsan Perdana.

Ihsan Perdana was the corporate social responsibility arm of SRC.

Under questioning from Najib's counsel Harvinderjit, Nizam (photo) says that he and two other Bank Negara officers arrived at the bank at 10am and stayed there until between 8.30pm to 9pm as part of a raid on the bank.

Nizam said among the documents seized in the raid were Real-time Electronic Transfer of Funds and Securities System (Rentas) forms related to Ihsan Perdana’s three bank accounts with Affin Bank.

“Can you bring the Rentas forms tomorrow (during further cross-examination)?” asks Harvinderjit, to which Nizam replies in the affirmative.

4.02pm - Justice Mohd Nazlan orders the proceedings to stop for a short break.

This follows an application from both the prosecution and defence to be given time to sort out documentary evidence linked to Nizam's testimony.

3.46pm - During the examination-in-chief, Nizam testifies that Affin Bank handed him information on Ihsan Perdana Sdn Bhd's three current accounts with the bank after he served the notice on them.

He lists out the documents given by a representative of Affin Bank at its Raja Chulan office in Kuala Lumpur, on July 6, 2015.

He says he was handed the account opening forms; specimen signature forms; list of authorised signatories; customer due diligence forms for the three accounts; and statements of account related to the opening of said accounts.

Ihsan Perdana was the corporate social responsibility arm of SRC.

The funds were subsequently passed on to Ihsan Perdana on the same day.

A total of RM32 million from this amount purportedly found its way into two Ambank private bank accounts belonging to Najib two days later, in two tranches of RM27 million and RM5 million.

Both transactions were backed by a AffinBank remittance application form.

According to the remittance application form, the transfer to the Ambank account was for "CSR (corporate social responsibility) programmes".

The next round of transactions in 2015 took the same pattern with two tranches of RM5 million being allegedly transferred from SRC International on Feb 5 and Feb 6 respectively.

Both tranches of RM5 million were then purportedly transferred to Ihsan Perdana on the same day before being transferred in a single transaction of RM10 million to Najib's account on Feb 10, 2015.

This was also backed by a AffinBank remittance application form.

Similarly, the "details of payment" was listed as "fund transfer for CSR programmes".

3.20pm - Azizul is released from the witness stand.

The third prosecution witness Mohammad Nizam Yahya, 39, is called. He is an analyst at the Financial Intelligence Department of Bank Negara.

3.15pm - Azizul (below) testifies that he lodged a police report in relation to the raid on Ambank’s Raja Chulan branch on July 6, 2015.

During cross-examination by Harvinderjit, the second prosecution witness says that he made the report after he had finished the raid.

He says that it is standard procedure to lodge a police report after every raid.

When asked by Harvinderjit whether any other investigation paper was opened in relation to the raid, Azizul says he does not know.

2.45pm - Proceedings resume with the further cross-examination of Azizul by Najib's counsel Harvinderjit.

2.36pm - Najib enters the courtroom after the lunch break, and takes a seat in the front row of the public gallery as he waits for proceedings to resume.

12.55pm - Najib exits the courtroom to enter a vehicle waiting near the lobby of the court complex.

He shakes hands with two of about seven supporters who escort him to the car, and the smiling former premier is heard saying: "A lot of reporters (at the court lobby)."

11.45am - Najib's counsel Harvinderjit Singh asks Azizul whether he had received orders to obtain bank documents on the specific transactions between RM5 million and RM40 million, which took place between Dec 2014 and Feb 2015.

Azizul says he merely received orders to look for certain documents containing specific account numbers, and that he had not been told to seek documents listing specific transactions.

He adds that the bank documents detailing the transactions in question were given by Ambank Raja Chulan branch manager R Uma Devi without him asking for them.

The second prosecution witness is referring to the raid which he took part in on the commercial bank branch on July 6, 2015, which netted the bank documents of Najib, SRC International and Gandingan Mentari.

Azizul says, earlier during the day, Uma Devi had handed him bank documents listing, among others, the opening of bank accounts for Najib, SRC International and Gandingan Mentari. However, this early batch of documents had not contained details of the transactions in question.

Uma Devi had handed him a later batch of bank documents at 9.15pm the same day, he says.

He explains that the bank’s branch manager had come out of the office, saw him still waiting at the bank at Kuala Lumpur, and handed him the documents detailing the specific transactions.

List of specific transactions contained in bank documents handed to Azizul on July 6, 2015:

11am - Azizul says that among the bank documents given to him during a raid on Ambank Raja Chulan branch on July 6, 2015, were documents indicating transactions between RM5 million and RM40 million, which took place between Dec 2014 and Feb 2015.

However, it is unclear which bank account this involved.

10.34am - Azizul testifies that the second team raided a different part of the Ambank branch at Raja Chulan, KL, on July 6, 2015.

During cross-examination, the prosecution's second witness says after he finished taking the bank account documents of Najib, SRC International and Gandingan Mentari, he waited at the bank until nightfall to go back with the second raiding team.

Azizul, however, adds he does not know who else other than his Bank Negara colleagues were involved in the second raiding team, or what documents or items were seized by them.

Azizul says that he arrived there in the morning and stayed there until 9pm that day to await a separate team finishing their own raid on the same bank.

9.42am - Thomas informs the court that the matter of photocopying the documents, which caused proceedings to be put off yesterday, has been resolved.

9.40am - Najib enters and sits in the dock as proceedings begin.

9.32am - Najib and Shafee enter the courtroom.

The former premier sits in the public gallery while looking at his smartphone.

Shafee meanwhile joins the rest of the defence team in the front row seats reserved for lawyers.

8.58am - Muhammad Shafee Abdullah, who is leading Najib's defence team, arrives at the court grounds.

8.48am - Najib arrives at the court complex in a Proton Perdana with the number plate TN50. He is wearing a grey suit and greets some members of the media before entering the building.

The third day of the criminal trial of former prime minister Najib Abdul Razak involving RM42 million of SRC International Sdn Bhd’s funds is set to start at the Kuala Lumpur High Court at 9am today.

Najib is facing a trial into three counts of criminal breach of trust (CBT) and one count of abuse of his position as then-prime minister in relation to funds amounting to RM42 million linked to SRC International, a former 1Malaysia Development Berhad (1MDB) subsidiary.

The 65-year-old politician, who was also finance minister and adviser emeritus of SRC International, is also facing three money laundering charges over the RM42 million.

The three CBT charges are laid under Section 409 of the Penal Code, the abuse of position charge is under Section 23 of the MACC Act 2009, and the three money laundering counts are per Section 4 (1) (b) of the Anti-Money Laundering, Anti-Terrorism Financing and Proceeds of Unlawful Activities Act (Amlatfa) 2001.

If convicted, the Pekan MP can be sentenced up to 20 years in jail, whipping and fine for the CBT charges; a maximum 20 years' in jail and a fine not less than five times the amount of bribe involved or RM10,000, whichever is higher, for the abuse of position charge; and jail time not exceeding 15 years, and a fine up to RM15 million or five times the amount involved, whichever is higher, for the money laundering charges.

His case will be presided by judge Mohd Nazlan Mohd Ghazali, with the trial to kick-off this morning with Najib’s defence team to cross-examine the second prosecution witness, Bank Negara investigation officer Azizul Adzani Abdul Ghafar.

During the second day of the trial yesterday, Azizul, 41, testified having obtained bank account documents of Najib, SRC International and its unit Gandingan Mentari Sdn Bhd, in a raid at Ambank's Raja Chulan branch in Kuala Lumpur, on July 6, 2015.

Azizul testified that the commercial bank’s branch manager R Uma Devi handed him eight sets of documents, which dealt with bank account openings from 2011 to 2015, involving four by Najib, three linked to SRC International, and one involving Gandingan Mentari.

The witness said that after he listed the documents in a confiscated items list, he handed both them and the list to Bank Negara’s investigation officer Ahmad Farhan Sharifuddin, on July 7, 2015.