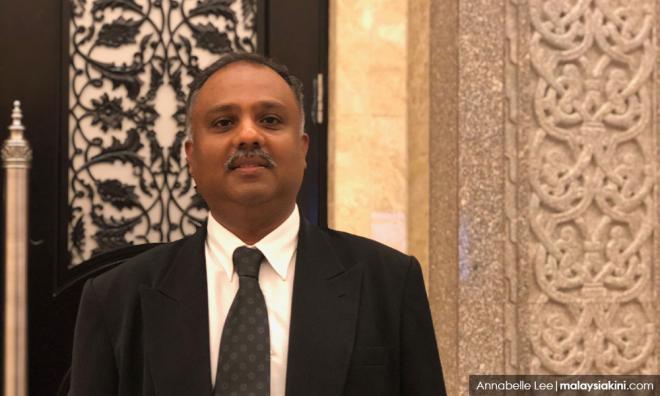 The father of lawyer Arun Kasi, who is engaged in contempt proceedings with Attorney-General Tommy Thomas, has vowed to fast in front of the Parliament until "justice" prevails for his son.

In an open letter to Prime Minister Dr Mahathir Mohamad today, Kasi Arunachalam Chettiar urged for the release of the recorded court transcript to establish if Thomas has followed the rule of law in the case.

The 78-year-old claimed that his son has hardly been given the chance to defend himself in the proceedings.

"The attorney-general filed the application for leave on Feb 26, 2019, at 6.39pm. He got it instantly heard ex parte the next morning and it was granted," the letter read.

"No certificate of urgency or any form of written request can be seen from the publicly available e-filing system records. The attorney-general must explain how he secured the date."

Thomas initiated the contempt proceedings after Arun had commented on the Federal Court's decision to expunge a dissenting judgment by Court of Appeal judge Hamid Sultan Abu Backer in the case of Leap Modulation Sdn Bhd vs PCP Construction Sdn Bhd.

In the letter, Kasi also lamented the seemingly rushed manner in which the proceedings were conducted.

"Within 28 days, from March 1 to March 28, two interlocutory applications of my son were heard and dismissed, and the substantive application of the attorney-general to commit was heard and decision reserved on April 23, 2019.

"Hardly any counsel will accept the brief and be properly able to argue in the short intervals within which the attorney-general secured the hearing dates, more so this case being before the highest court at the first instance."

Kasi further claimed that Arun was deprived of the right of appeal.

"Even a murderer, robber or rapist will be given fair opportunity to defend, and reasonable time for his counsel to prepare, but the attorney-general did not allow that to my son," he alleged.

"My son’s law practice was abruptly disturbed by the conduct of the attorney-general and is nearly finished off, with clients taking away files at Federal Court and other courts.

"The proceedings have severally damaged the entire family, particularly my son’s only child, reading law at the age of 15."

Kasi then pointed to the court's refusal to provide the recorded transcript of the proceedings, which he had requested to apply for a review of the interlocutory decisions.

"I want the Parliament to watch the recording to see how the attorney-general conducted the proceedings and applied the rule of law.

"With due respect to the court, I most humbly call upon Mahathir now to direct the attorney-general to ask the court for the recording, and hand it over to my son to enable him to make the review applications.

"If that does not happen, I will have no alternative but to day-time fast before the Parliament until the recording is made available to my son, by permission of the honorary speaker," he said, adding that he was confident that justice would eventually prevail.