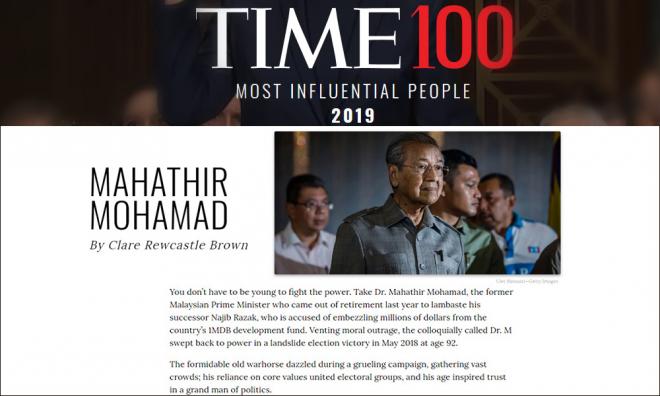 Time magazine has included Prime Minister Dr Mahathir Mohamad in its list of 100 most influential people for this year.

In a profile penned by Clare Rewcastle-Brown, the founder of whistleblower site Sarawak Report, Mahathir is described as a formidable old warhorse who dazzled during a gruelling (election) campaign.

"You don’t have to be young to fight the power.

"Take Mahathir, the former Malaysian prime minister who came out of retirement last year to lambaste his successor Najib Abdul Razak, who is accused of embezzling millions of dollars from the country’s 1MDB development fund," she wrote.

"Now 93, Mohamad has committed to hand over power to the former leader of the opposition, Anwar Ibrahim, 71, whom he released from jail days after his victory.

"For Malaysia, the episode has re-established democracy in a country that almost teetered into totalitarianism."

The 100 most influential people put up by Time is a yearly list based on the votes of its readers, which was opened from March 27 until yesterday.