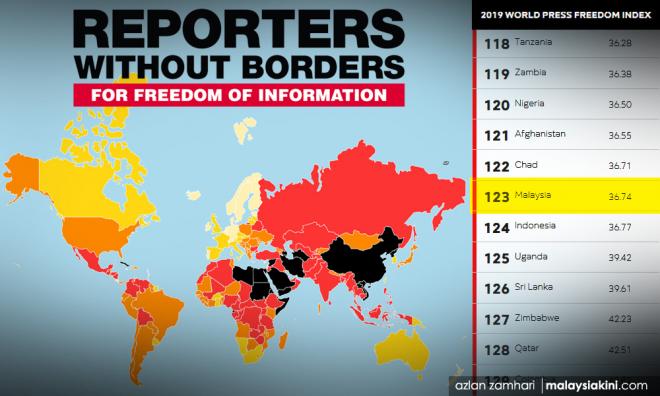 Malaysia's ranking on the World Press Freedom Index 2019 jumped 22 places to 123 out of 180 countries, according to Reporters Without Borders (RSF).

The Paris-based watchdog attributed the significant rise to the BN administration being ousted in last year's general election, which it said impacted upon the freedom of the media to inform.

"This blew a fresh air through the ossified media, and transformed the environment for journalists, propelling Malaysia to 123rd place," it said in a statement today.

"The general environment for journalists is much more relaxed, self-censorship has declined dramatically, and the print media are now offering a fuller and more balanced range of viewpoints."

RSF also noted that media outlets and journalists that had been blacklisted – including cartoonist Zunar – could now get back to work without fear of harassment.

Despite attributing the improvement to Prime Minister Dr Mahathir Mohamad's efforts to repeal the Anti-Fake News Act 2018, the watchdog noted, however, that authorities "still have a draconian legislative arsenal with which to suppress media freedom."

This includes the Sedition Act 1948, Official Secrets Act 1972, and Communications and Multimedia Act 1998, all of which enable authorities to impose strict control over publication licences.

Malaysia recorded a score of 36.74 for 2018, falling 10.67 points from the year before. According to the index, a higher score indicates deteriorating press freedom.

Aside from Malaysia, RSF also pointed out that Maldives also climbed 22 places to rank 98th, as its new administration has pledged to improve press freedom.

Hong Kong fell three notches to 73rd, the watchdog added, as its traditional media readily complied with dictates from China, which itself fell one place to 177th.

Finishing at the top of the index was Norway, followed by Finland and Sweden.

Will revoking the Anti-Fake News Act be beneficial?
15 Apr 2019
No business of the media to build inclusive narrative
24 Mar 2019
Gobind: Not about curtailing free speech, but encouraging responsible use
12 Mar 2019
Draft bill for media council targeted for end-April
5 Mar 2019