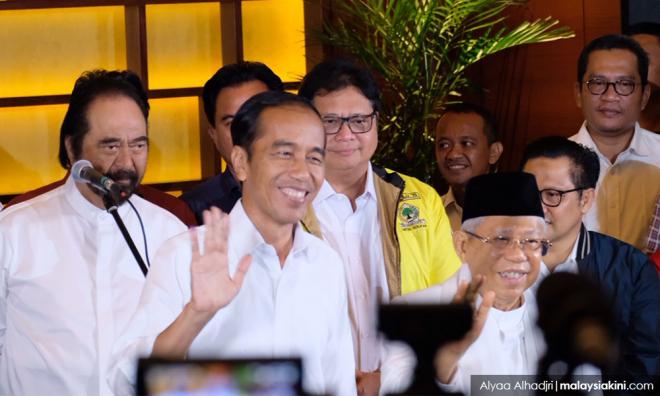 Indonesian President Joko Widodo (above) appeared on course on Thursday for a second term, based on unofficial vote counts and despite the objections of his rival, while police vowed firm action against any rallies that could disturb security.

Results from private pollsters who counted vote samples from Wednesday's poll point to a comfortable win for Widodo, raising hopes for a splurge of reforms in his second term.

The "quick counts" showed Widodo winning the popular vote with at least 54 percent, giving him a lead of around eight percentage points over former general Prabowo Subianto, who was narrowly defeated by Widodo in the election five years ago.

The counts from reputable pollsters have proved to be accurate in previous elections, though the official result will not be announced until May.

Prabowo, a former son-in-law of military strongman Suharto who was overthrown in 1998, said on Wednesday he was not trailing Widodo and believed his share of the vote was in a 52-54 percent range.

"We have noted several incidents that have harmed the supporters of this ticket," Prabowo said, without giving detail.

"I appeal to anyone not to mobilise, whether to mobilise people to celebrate victory or mobilise due to dissatisfaction," said Karnavian, pledging firm action.

At the same news conference, chief security minister Wiranto called for people to avoid "any act of anarchy that breaches the law" while waiting for the official election result.

In 2014, Prabowo had also claimed victory on election day, before contesting the results at the Constitutional Court, which confirmed Widodo's win.

Widodo said on Wednesday the results indicated he had regained the presidency of the world's fourth-most-populous nation, but urged supporters to wait for the election commission to announce official results.

The front page of Indonesia's English-language Jakarta Post newspaper carried the headline: "Five More Years" next to a picture of the president.

Financial markets rose before trimming gains with the rupiah currency up 0.3 percent from the previous close and the Jakarta stock index up 0.6 percent by midday.

Alexander Raymond Arifianto, a political analyst at the S Rajaratnam School of International Studies (RSIS) in Singapore, said Widodo's margin of victory meant the opposition did not appear to have a strong case to claim the election was stolen.

But he noted risks that Islamist supporters of the challenger, including the hardline Alumni 212 movement, could hit the streets to dispute the election.

"So Prabowo has no case, but the hardliners and Alumni 212 can create lots of headaches for Jokowi if they go ahead with their protest plan tomorrow and in future weeks," he said, referring to the president by his nickname.

Novel Bamukmin, a spokesman for Alumni 212, said the movement planned a peaceful march after Friday prayers at Jakarta's Istiqlal mosque.

"We just want to bow down to express our gratitude in order that this victory is recognised," he said, referring to Prabowo's claim he won the election.

Islamist groups have in the past been able to mobilise tens of thousands of supporters.

From late 2016, they organised a series of big protests against the Jakarta governor, Basuki Tjahaja Purnama, the first ethnic-Chinese Christian to hold the job, who was subsequently jailed for insulting the Koran.