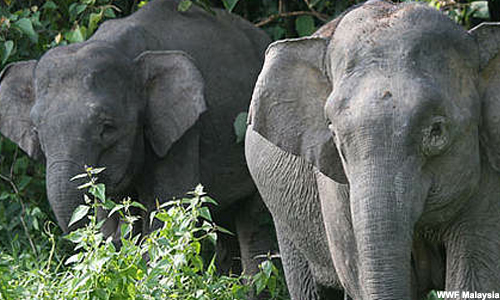 The Sabah government, in collaboration with the relevant departments, plantation owners and stakeholders, has agreed to form the 'Green Food Corridor' in several areas in Kinabatangan to provide a safe route to elephants moving from one place to another.

Deputy Chief Minister Christina Liew said the agreement was reached amid discussions to find the best ways to minimise the effects of human-wildlife conflicts as well as to ensure that the elephant species, one of the most popular tourism attractions to Sabah, was preserved.

"The frequency at which elephants are entering agricultural areas may be an indication that they are lacking food, in addition to them being isolated from one another due to agricultural development. This is evident in the Kinabatangan Wildlife Sanctuary.

"This corridor has been identified and the owners of the area have agreed in principle to allow their areas to be used as elephant paths and landowners will also grow plants as animal feed," she said when delivering her ministry's winding-up speech at the Sabah State Legislative Assembly today.

Meanwhile, on the Bird's Nest Permit, Liew said the swiftlet farm operators who were still unable to produce revenue from their bird's nests were exempted from paying the permit fee of RM200.

Liew said the bird species producing edible bird's nest were protected under the 1997 Wildlife Conservation Enactment, hence the permit was required to breed or sell the bird's nest in accordance with Section 78 of the Enactment.

On another note, Liew, who is also Sabah Tourism, Culture and Environment Minister, said another international carrier, Air Busan from Korea, will start operations in Kota Kinabalu from May this year.

"Busan Air will operate a direct route from Daegu, Korea from May 4 with four flights per week, while from Busan, it will begin on May 22 with seven flights a week.

"This will boost the arrival of tourists from Korea to Sabah," she said, adding that Sabah currently had 220 international direct flights a week from 25 destinations.