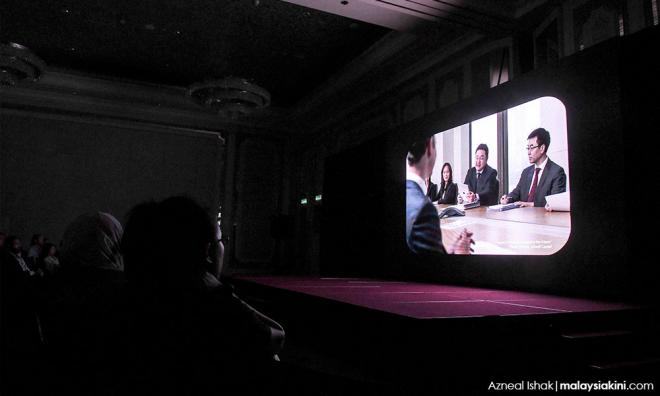 'The Kleptocrats', a documentary about the 1MDB scandal, was launched in an exclusive screening attended by some 70 guests in Kuala Lumpur last night.

The documentary centres on fugitive businessperson Jho Low and his connections with the family of former prime minister Najib Abdul Razak.

Promotional materials for the 86-minute film call it "the first full-length feature documentary about the 1MDB scandal".

International journalists who pursued the 1MDB story for years were also interviewed for the film.

These included The Wall Street Journal's Tom Wright and Bradley Hope, as well as former New York Times journalist Louise Story. The latter is also an executive producer of 'The Kleptocrats'.

The documentary examines the effects of high-level corruption and alleged embezzlement of taxpayers' money.

Additionally, it highlights the efforts of Malaysians in pushing for accountability and change.

It concludes with events that took place directly after the 14th general election (GE14), which saw the BN suffer an unprecedented defeat to Pakatan Harapan.

"The film is a tribute to the many Malaysians who refused to be silenced, even as they were harassed, charged and arrested,” the documentary’s executive producer Alexander Soros said in a statement.

"The peaceful transition in Malaysia since May 2018 is a historic opening an opportunity to deepen democracy in the country.

"But significant work is needed to ensure that such scandals do not happen again," added Soros (below), who is also the deputy chair of Open Society Foundations, an international grantmaking network.

'Happy to finally see it'

PKR vice-president Tian Chua, who was present at the screening, told Malaysiakini that he was first approached by the filmmakers about the documentary around 2015, but never imagined it would be aired in Malaysia.

"But I am happy to finally see it and we are free to show (the documentary). This is a great achievement of the Malaysian people.

"We are thankful and we are very happy that Alex Soros and his team were engaging in it and helping Malaysian people open their eyes and see the whole thing," Chua said after the screening.

Another guest at the screening, lawyer Andrew Khoo, said though the film was well done, it seemed to cater towards a Western audience, who may be less familiar with the scandal.

"It obviously was written a little bit from a Western angle and meant for a Western audience, but to some extent, it is meant for people who don't know about this story.

"But it is nice that at least the story is out there, so people can begin to understand the enormity of the situation and the gravity of the offences that have been committed," Khoo told Malaysiakini.

The documentary is currently available in Malaysia on Astro on Demand.