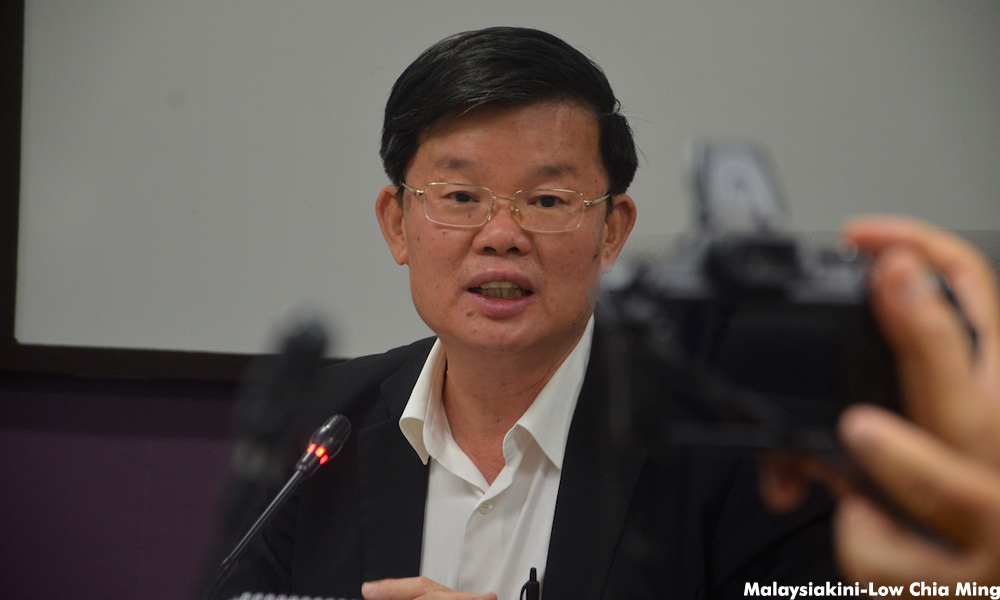 Khoo had quoted a report in The Star which said that the reclamation of three islands in southern Penang could generate up to RM70 billion. He later denied saying this, however, which prompted the argument with the chief minister.

The reclamation project is intended to fund the RM46 billion PTMP.

"There were two interviewers, I heard one interviewer quoted The Star – that it is RM70 billion (in revenue) – but then he said he didn't quote The Star, although I heard them quoting The Star,” he said when asked about the interview.

"You can't deny you didn't quote The Star, how can you deny it? I don't know which interviewer (said it), because I couldn't see them."

A video of Chow's response was uploaded by the Penang government-owned Bulletin Mutiara.

Chow added that he did not really cut the interview short, as it had already approached its end.

"It was not really a hang up, as time was up.

The PTMP includes the Bayan Lepas LRT, Ayer Itam Monorail, and Tanjung Tokong Monorail on Penang island, as well as the Raja Uda-Sungai Nyiur-Bukit Mertajam-Permatang Tinggi Monorail on the mainland, coupled with a BRT extension to Kepala Batas.

It also includes the Permatang Tinggi-Batu Kawan BRT line on the mainland, which will be extended northwards to Bukit Tengah/Seberang Jaya and southwards to Nibong Tebal.

Also in the masterplan are the Pan Island Link 1 (PIL1), Pan Island Link 2 and 2A, North Coast Pair Road, new interchanges at Butterworth-Kulim and Juru, road upgrades at Permatang Pasir-Perda and Bukit Minyak, as well as an undersea tunnel as a third link between the island and mainland.

Reclamation works for three manmade islands in the south of Penang, which will be used to fund the above projects, are also included in PTMP.

The interview transcript shortly before the argument broke out is reproduced below.

Q: CM, in terms of the RM46 billion cost for the PIL1 highway, which, of course, as you have previously supported...

Q: What is the exact amount?

Q: What is the Penang Transport Masterplan going to cost overall?

Chow: Then yes, you say the overall transport masterplan plus the reclamation, it is around that figure, yes.

Q: How is it going to be funded?

Q: That's right, three islands, 4,500 acres, who is going to be developing it and reclaiming the land?

Chow: The state government is the project owner and asset owner...

Q: Who will be doing the work, chief minister?

Chow: It has to be appointed through an open tender.

Q: And who are the tenderers at this point of time?

Chow: Anybody who thinks they can offer the best price can tender for the job...

Q: Who have you earmarked at this point of time for this tender?

Chow: How could we earmark? It's an open tender, everybody is welcomed to bid for it.

Q: When is the tender open?

Chow: When it is ready.

Q: Which is when?

Q: Specifically, first half or second half?

Chow: No, I have no answer. We have just got the go-ahead, and I think there is still a lot of work that has to be done – so many compliances we have to fulfil before even thinking of starting the project.

I think we have given our commitment that we will never, and can never, start unless we secure all approvals and compliances fulfilled.

Chow: I mean you quoted The Star RM70 billion...

Q: I didn't quote any The Star numbers, CM, I'm asking you now.

Chow: You quoted, I said you quoted earlier on.

Q: It wasn't me, I'm asking you now, what is the expected fiscal return?

Chow: I mean your radio station. I don't know who is over the other end, do you expect me to name the person? I can't.

Q: No, I'm asking you what is the fiscal return for this project which is going to cost RM46 billion.

Chow: Let me get my thoughts and reply you, you have been getting rude now.

Q: Fair question CM, (the) government is going to spend RM46 billion, what is the fiscal return?

Chow: That is why I answered, you quoted The Star saying RM70 billion, I think it can be more than that.

Q: Thank you ever so much for your time.

Chow: You didn't want to hear my answer.

[Chow hangs up]. The following is the audio recording of the interview:

penang
ptmp
chow kon yeow
penang transport master plan
Related Reports
Gerakan calls on Penang CM to explain PSR 'approval' gaffe
a year ago
Penang CM: Khalid statement that PSR not approved yet is 'technically true'
a year ago
Chow Kon Yeow, what are you up to?
a year ago
No green light on Penang reclamation project yet, says Khalid Samad
a year ago