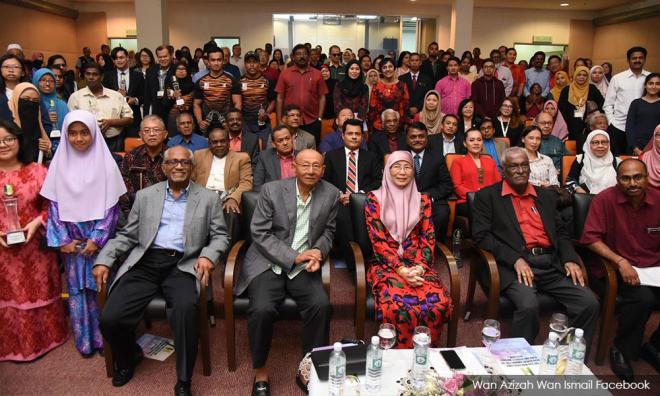 The government's plan to reduce the size of the civil service will not affect the policy of one percent participation from people with disabilities, Deputy Prime Minister Dr Wan Azizah Wan Ismail said today.

Wan Azizah assured that posts reserved for people with disabilities will be maintained.

“We (government) want more people with disabilities to join the civil service," she told reporters after officiating the 2017/2018 Malaysian Association for the Blind (MAB) Excellence Awards ceremony in Kuala Lumpur today.

"Currently, the one percent target has not been met, so we will preserve the vacancies allocated for the group.”

Wan Azizah said the government was currently focused on meeting the one percent quota for people with disabilities before planning on increasing it.

Apart from this, she said, various efforts were being taken by the government to encourage the private sector to hire people with disabilities, including tax exemption for employers on expenditure to meet their needs.

Earlier in her speech, the women, family and community development minister said that according to the Public Service Commission, some 3,800 people with disabilities (0.31 percent) were appointed to a range of positions in the civil service as at end-2018.

She added that her own ministry had surpassed the one percent target, with 144 posts (1.77 percent) filled.

The Defence Ministry came in second with 0.98 percent, while the Terengganu State Secretariat Office was in third place with 0.97 percent posts.

The one percent intake policy was introduced in 1988 and was implemented through service circulars in 2008 and 2010, outlining affirmative solutions to be taken by ministries, agencies and departments.

“My ministry, through the Social Welfare Department, provides cash assistance to registered people with disabilities, namely, aid for assisting devices, allowances for disabled workers amounting to RM400 per month, as well as launching grants of up to RM2,700 for people with disabilities to pursue income-generating projects,” she said.

She said her ministry’s plans for 2019 was to conduct two studies on people with disabilities, specifically on employment opportunities and also on the support system for carers and guardians.

“Both studies will be headed by Institut Sosial Malaysia. The implementation process for these studies have already begun and is now in the process of identifying the most suitable research team for the projects.

“I believe that upon completion of the studies, the ministry will be able to gauge the current situation of people with disabilities and possibly formulate specific roadmaps as well as evidence-based policies and programmes focusing on this target group,” she said.