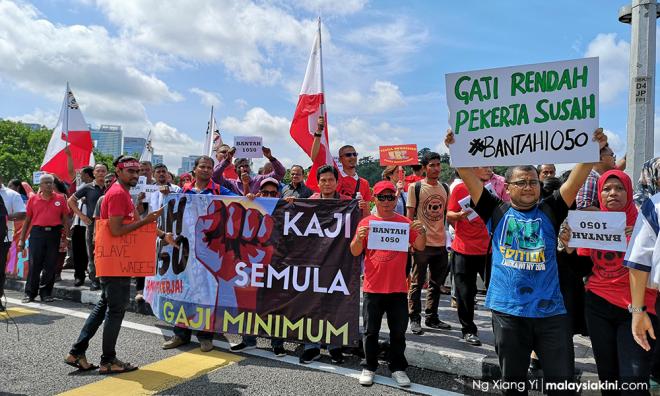 COMMENT | Recently under intense pressure to raise the minimum wage, the Human Resources Minister M Kulasegaran said a review will be done within 16 months.

This is actually no breaking news because whatever he says, under the law, the minimum wage must be reviewed within two years which means the next review must be 2021.

Now let’s dissect his statement further so that we don’t get fooled over and over again.

1. Has the Government been fair in reviewing the minimum wage every two years?

So this is the history. Why can a review not be promptly put in place?

The first task of the minister is to ensure that a new wage is in place on the dot. We are fed-up of hearing that further studies need to be done, especially in the last three months before the new wages are to be implemented. So Kulasegaran needs to have a clear timeline from now that on Jan 1, 2021, a new minimum wage will be announced.

2. Who decides the minimum wage?

Two days ago Kulasegaran said that “After obtaining the appropriate rate, the committee will submit the recommendation to me to be presented to the cabinet before it is to be decided and announced to the public”.

This is the SOP, but this is not what happened the last time.

Last year, the prime minister announced the minimum wage and he always said that he was advised by the Minimum Wage Council.

The minimum wage announced by the prime minister last year was a sham which none of his cabinet was brave enough to comment on it.

Kulasegaran said that it was in the PM’s hands. Finally, the Prime Minister’s Office issued a statement of RM 1,050. Who advised him on that figure?

Now let’s look at their rule of law which the PM is so fond of mentioning.

If we take the formula used by the Wage Technical Committee, they take into account the following items when determining the minimum wage. These components are the poverty line, productivity growth, consumer price index, unemployment rate (actual, region), average wage per household and medium wage.

Based on this formula, our calculation shows that the minimum wage for Peninsular Malaysia should have been RM 1,368 and Sabah and Sarawak RM 1,175 and RM1,185 respectively.

The Wage Council actually proposed a rate of RM 1,170 to the Cabinet. But what the Prime Minister announced was RM 1,050, which was the recommendation of the Malaysian Employers Federation. Only after a big public outcry and protest at Parliament did the Finance Minister announce another RM50 increase, making it RM 1,100.

Will the Minister take the views of the Minimum Wage Technical Committee seriously when their formula or their recommendation was not taken into account in the last announcement?

Why can’t their recommendation be made public, instead of being hidden under the Official Secret Act?

Why are we spending millions of ringgit on this committee when their views are not taken into consideration?

Therefore, the second task of the minister is to give independence to the committee and allow wages to be determined by them and not the bosses like what was done in the last one. Will the cabinet follow this or let the PM or the employers’ federation determine the wages?

3. All arguments against increasing the minimum wage were demolished

The most critical matter is all studies have shown that Malaysian wages are low. We have the lowest purchasing power in Asean. In last year alone, the top 40 percent richest people in Malaysia saw wealth increase by another 30 percent.

Mahathir himself has said that GDP growth benefited the capitalists and not the workers. Mahathir said that while Malaysia's GDP growth is considered one of the best in the region, only one-third of its total would benefit workers.

This is coming from the mouth of the same Prime Minister who ensured that minimum wage was never implemented when he was the PM for 22 years from 1981-2003. Now let’s look at the other arguments.

4. The Government does not have enough money – blaming the previous Government?

5. Many SMEs will close down?

This suggests that Malaysia’s current wage productivity levels are misaligned. The Bank Negara report, citing an example, said that if a Malaysian worker produces output worth US$1,000, he would be paid US$340 compared to US$510 received by workers in a corresponding wage for producing the same output.

PSM has proposed on many occasions an Asean-level minimum wage and Asean-level corporate tax to ensure the capitalists don’t make the countries in the region compete with each other to race to the bottom.

Anyway, if we have good economic and governance policies not linked to kowtowing and other corruption coated schemes, investors will stay.

Last year, the top 40 percent richest people in Malaysia increased their wealth by 30 percent, but real wages have not gone up for the last seven years. In contrast, a Merdeka Centre study in 2017 with 1,203 respondents revealed about 15 percent of Malaysians skip one meal a day, 64 percent are suffering from stress related to economic problems, 40 percent make late payments in their electricity and telephone bills and 30 percent have less than RM500 in their savings.

It is time for the Pakatan Harapan government to stop talking about trying to increase the minimum wage to RM1,500 when their first term ends because recent studies by Bank Negara has clearly stated that minimum wages need to be at least RM1,800 now.

This is the figure put forward by the MTUC and we call upon the Government to raise the minimum wage in order to boost our economy, as well as create a dignified society based on decent pay.

We refer to the call made by Bank Negara Governor Nor Shamsiah Mohd Yunus who said that currently, workers in Malaysia are not paid equitably despite playing a larger role in the production process of labour-intensive industries such as wholesale, retail and food and beverages.

Bank Negara in its study “The living wage: beyond making ends meet”, highlighted that the bottom 40 percent of households in Malaysia cannot keep pace with the cost of living and said their earning are just not enough.

Kulasegaran and the Harapan government should look into these issues of wages. The wellbeing of the workers will ultimately decide who runs this country.

Real wages issues are real issues. This year’s May Day will be a good time to appreciate the workers for their contributions and to pay back their long overdue dues.