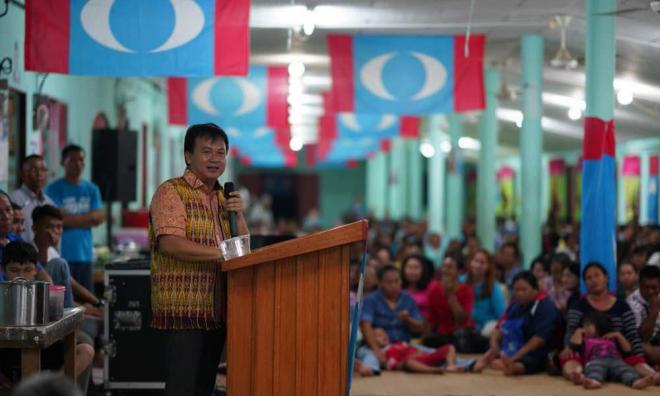 The facts of a calamitious betrayal by GPS

MP SPEAKS | I read with amusement the various reasons popping up in the press and social media by GPS politicians, and supporters of GPS who have become "constitutional experts" overnight, on the amendment to the Federal Constitution in recent days.

These reasons vehemently regurgitated by GPS are in reality excuses to deflect from the real betrayal that occurred on the night of April 9 when GPS abstained from voting.

In Parliament, GPS MPs chose to not vote by ostentatiously abstaining, but when in Sarawak they and their supporters talk very loudly to Sarawakians as if they are heroes by insisting the Bill was flawed.

In that case, if the Bill was indeed flawed, then they should have publicly opposed the Bill and voted against it for all to see. Instead, they chose to abstain.

By choosing to abstain, they are not saying it was wrong and neither are they saying it was right. They are neither here nor there.

But at home to Sarawakians, they craft a narrative that they are the protector of Sarawak's rights.

Normally, I seldom join the fray and speak out. It is not my style. But enough is enough. It is incumbent upon me to dismantle GPS' false assumptions with facts.

Let me say this plainly and make myself clear once and for all. This needs to be said in no uncertain terms so that Sarawakians are fully made cognisant of the situation.

When Pakatan Harapan tabled the Bill to amend the Federal Constitution on April 9, the main purpose and objective of the amendment was to restore Sabah and Sarawak's status to pre-1976 when all three entities (Malaya, Sabah and Sarawak) were equal partners in Malaysia.

It was a grand first step on the journey to returning Sabah and Sarawak's rights in stages and incrementally according to MA63. Period.

This was what Harapan promised in our New Deal and this was what we delivered by tabling this Bill to begin the restoration of equal status.

Unfortunately, GPS chose to derail this long-held aspiration of Sarawakians and Sabahans for their own political purposes instead of protecting their rights and interests.

That is the crux of the matter. Harapan delivered but GPS put up a roadblock.

GPS is now saying that the Bill should have included this and that and that Harapan was therefore not sincere when we tabled the Bill which only addressed Article 1(2).

GPS was very much part of the Federal government before May 9 and almost all of their MPs are seasoned parliamentarians. They know full well that the amendment of other provisions can be done incrementally, which is later over a period of successive parliamentary sessions.

To amend the entire package of Articles pursuant to the MA63 is not only cumbersome but would also take a long time.

Our intention was to amend first the core Article that would make Sarawak one of three entities on the night of April 9 but GPS chose to let Sarawak remain as one of the 13 states.

This is the bitter truth that GPS does not want Sarawakians to remember. Even more bitter would be that fact that they failed in protecting Sarawak's rights all those years and they cannot claim to be heroes. They know that this would be the fatal silver bullet when the State election is held by 2021.

Further, they made a song and dance of going to London to collect so-called facts and evidence but until today, nothing has been published of their fact-finding mission. Nothing.

Sarawakians are left clueless of their findings! Instead, we hear a lot of noise and spinning of legal niceties but no real facts.

Sarawak's rights are clearly defined and enshrined in Schedule 9 of the Federal Constitution. GPS knows this full well. Our immigration autonomy is iron-clad and cannot be tampered with, let alone eroded or taken away.

No right-minded Sarawakian, especially myself, would surrender this Holy Grail of Sarawak's autonomy to anyone. Yet, GPS is playing up this issue, knowing that this sentiment is an emotional one. This gimmick by GPS is worse than scaremongering - it is downright immoral to lie to the voters.

Other rights like proceeds of taxations, oil and gas royalties, healthcare, education and special grants are subjects of negotiations and further discussions. These have absolutely nothing to do with the intended Federal Constitution amendment.

GPS knows this and yet they insinuate otherwise. The MA63 Technical Committee which comprises representatives from GPS are tasked with these discussions and negotiations and it will take some time.

So it is again another blatant attempt by GPS to mislead Sarawakians that these complex issues are part and parcel of the amendment to Article 1(2).

GPS is desperately attempting to portray that the Federal Constitution has many loopholes and that Article 160 is one of these loopholes. They insist that Article 1(2) cannot be amended without amending Article 160 or inserting the words, "pursuant to MA63".

I am very amused that GPS decided to ignore the explanatory notes that accompany the amendment which, in no uncertain terms, state that "the amendment is made in the spirit of MA63 and in recognition of the aspirations of Sarawakians."

How different is this from, "pursuant to MA63"? The legal meaning does not change and if the matter were to be brought to the courts, the legal meaning would be exactly the same.

The lawyers in GPS know this, but I am amused that they think they can pull the wool over the eyes of Sarawakians with their convoluted arguments designed to confuse and obfuscate the issue.

GPS is now in full damage control mode and trying to control the narrative that there are so many weaknesses in the Federal Constitution and over how Sarawak's rights were eroded since 1974 with the Petroleum Development Act, followed by the demotion of status in 1976.

The Hansard of the Dewan Rakyat faithfully records that PBB and other coalition parties of Sarawak that were the government in 1974 fully supported the giving away of control and ownership of our oil and gas and then, to add insult to injury, removed our equal partner status two years later in 1976.

In 2012, it was also recorded how many of the very same GPS MPs who abstained on the night of April 9, also fully supported and voted to hand over control of our seas in the Territorial Sea Act. These GPS MPs were the government since 1963 when Malaysia was formed until the 9th of May last year.

Did they not know of these so-called weaknesses in the Federal Constitution and the laws of the land? If they did, then it begs the question: why did they not amend the Articles and the law when they were the government of the day and had ample opportunities to redress the wrongs against Sarawak and Sarawakians?

I can, therefore, come to only one plain conclusion: GPS is insincere and merely playing politics. Let me say this in Malay: GPS tidak ikhlas dan hanya bermain politik.

They abstained in the Dewan Rakyat and hid their faces, but returned to Sarawak thumping their chests like heroes and now they want to confuse Sarawakians with their antics and dramatics by picking on nitty-gritty details to deflect from the real issue: GPS betrayed Sarawakians on April 9 and no amount of spin can undo their calamitous act on Sarawak.

Now that Harapan has bent over backwards to accommodate GPS and agreed to the setting up of a Parliamentary Select Committee on MA63, we wait with amusement to see what excuses GPS will come up with next to delay the inevitable.