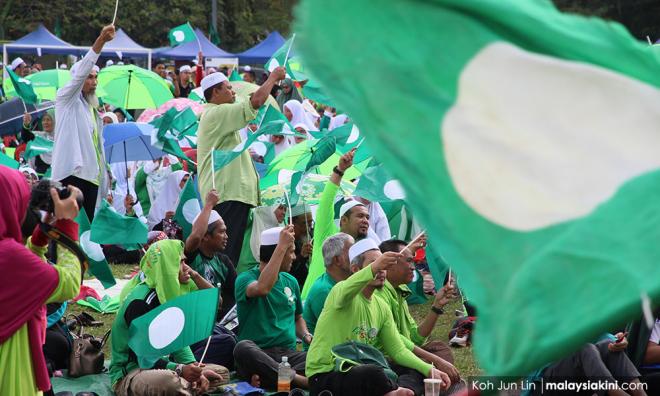 Yoursay: PAS and the fable of Animal Farm

YOURSAY | ‘Does PAS think that its followers are dumb and blind that they cannot see for themselves?’

Quigonbond: Life is a lot simpler isn't it, when you just assume that your lords will always do the right thing, that they are never cynical, that they will always only work for the rakyat like yourself, and that if they end up living in mansions or have money to go for frequent overseas trips, that's just because they are luckier in life.

So blissfully innocent. Innocence reduces stress and prolongs life. But hang on, who's going to financially support you when you supposedly live longer?

Pahang and Kelantan, and perhaps Terengganu too, are no economic engines. And why? Because they have fallen behind after years of ulama rule/corrupt rule.

Maybe the attitude then is, well, tak apa lah (never mind), maybe no good healthcare also fine. Everyone needs to die eventually so what's with being offed slightly earlier?

Good on you, loyal voters of Umno and PAS. Good on you.

Clever Voter: PAS vice-president Mohd Amar Nik Abdullah is where he is because he does not question the unethical practices of the person he reports to. Isn't this similar to the rules or the organised crime except here it is seemingly legitimate?

This man is unashamedly enjoying the material goods acquired with allegedly stolen money. It's really amazing how members are gullible enough to listen and follow their leaders.

Beman: "We, on the ground, can only see what is in front of our eyes. If we are in the jungle, we can't see anything but the trees and the bushes,” said Mohd Amar.

"But the leadership, when they are sitting on the tree, they can see what lies beyond the jungle. We see the jungle, but we don't see the tiger. But the president sees it.

"This is why we should trust the leadership. When (the president) asks you to run, don't be stupid and ask why you should run. Otherwise, you will be eaten by the tiger. When he asks you to run, just run, and then ask questions later."

This is classic ‘Animal Farm’. All animals are created equal but some are more equal than others. Basically, what he is saying to his supporters is, "We leaders are better than you dumb followers. So, don't look, don't speak, and more importantly, don't think. Just follow us."

Yes, just follow even if the so-called leaders are heading to an abyss.

Vijay47: An apology is due. I now realise that I had been hasty in my opinion of Mohd Amar, an opinion I must confess that does not place him too high in any ranking.

In his latest sermon regarding the obligation of PAS members to simply comply with instructions from party leadership and not raise questions, Mohd Amar used the allegory of the jungle and seating arrangements of differing heights.

I tell you verily, the man is a genius, a philosopher, and the only one who comes close to him may be Stephen Hawkins, who unfortunately has gone to that Black Hole in the Sky.

How appropriate Amar’s reference to the reality within PAS – the common workers and slaves drudging and toiling on the ground while the leadership, led by Abdul Hadi Awang, the statesman most admired by Rewcastle-Brown, having a swinging time amidst the branches, occasionally dropping bits of largesse to a grateful community of serfs.

We are now treated to another dose of religious principles. After the earlier lesson on how it is perfectly acceptable to lie through one’s teeth, we learn that the word of the Master is law almost of divine proportions, a credo that no doubt inspired Tennyson who came out with his immortal “Theirs not to reason why, Theirs but to do and die: as they rode into the valley of Death.”

I had always thought that my sweet Lord Tennyson was referring to the Light Brigade, little did I know that even in those distant years, PAS glory and fame had already spread to England's shores.

And the tiger that Hadi is supposed to warn the natives about? Don’t worry, tigers are close to extinction.

Bravemalaysian: They are too afraid that when members start to think and reason, the leaders will have no explanation.

But unfortunately for PAS, not all members are stupid. In fact, many are beginning to think and wonder why leaders are so inconsistent and are justifying lying to the members and to the public.

The leader's days are numbered and soon there will be a revolution within PAS.

Cogito Ergo Sum: This is what happened to Malaysia when Najib Abdul Razak ruled the nation. It’s not that no one asked questions. They did. And they were charged, arrested, jailed or bought over.

PAS wants to take us down that path again: ask no questions and let them wreck ruin in the name of religion and race. Sorry Mr PAS VP, been there and done that. Never again.

Anonymous 770241447347646: Do not ask questions for you will not be answered truthfully. PAS is worried that the people today are no less educated and they can very clearly detect a lie told.

So they are saying to its flock to blindly follow their lead. The leaders know best as they have a better view of what is happening.

The Sarawak Report debacle is one example of their view that they know better. Millions were lost, party reputation nearly damaged, lies were told to cover other lies.

Then the millions allegedly taken from Umno. How much of these illegal funds ended up in the pockets of certain leaders? Funds allegedly stolen from the Malaysian people. Haram money.

Does PAS think that its followers are that dumb and blind that they cannot see for themselves what is really happening around them?

When will they realise that in time they might have another exodus like Amanah, if they keep the truth from them.

Cyclonus: Yes, while I agree leaders should know best as they have (the supposed) strategic view and (supposed) high aptitude to absorb information, analyse, chart direction and formulate action plan, I see no harm in responding to questions by followers.

To motivate followers, they need to understand how they fit in the big picture. And just maybe, some of them can have a better idea on how things are supposed to be managed.

They might not know where the tiger is, but being on the ground, they know the terrain much better for escape compared to the holier-than-thou ulama sitting in castles in the sky.

From my experience, leaders sometimes don't want to explain the rationale of their actions for fear of being challenged (and hence loss of face).

But, only through constructive discussions will the optimum solution will surface. This is the difference between a progressive and mature society and a one that is oppressive and outmoded.

Citizen_Zero: We, in the city, are the ones financing them all these years, whether directly through our taxes, or via monies ‘stolen’ from us and given to them through the backdoor as peruntukan (allocations) or bribes.

And they at the same time resent and hate us for it, especially if we find out. These people can't be saved anymore. But then, saving them could be the final piece of the puzzle, the final act in our endeavour to sort out and save our country and bring it to our harmonious full potential.

Maybe saving them would be our redemption as well. Maybe we should spend the time and effort to engage, based on our humanity, to the end that they too would no longer be scared, and have a good life.

But maybe I'm just dreaming, because, in their good life, they'll still resent and hate us for that too.

Dangerous for non-Muslims to touch on Islam and rulers, says Hadi
24 Apr 2019
Is multi-racialism a problem for Malaysia?
23 Apr 2019
Umno must get past elite and aristocratic leaders, says veep
23 Apr 2019
Hadi: Let Anwar reveal recipients of Umno money
21 Apr 2019