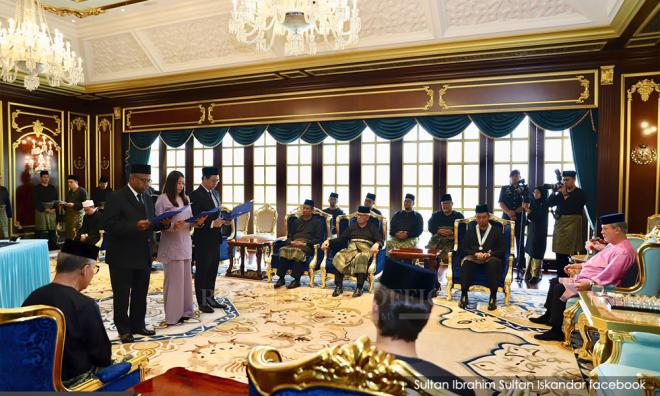 Yoursay: Is it wise for DAP to stay out of Johor spat?

YOURSAY | ‘The controversy between the rulers and Mahathir is not DAP’s battle.’

The Wakandan: I like DAP’s strategy on this – revealing that the dropping of Tan Hong Pin from the Johor exco line-up was not their decision.

That is a practical approach to take on this issue and it could very well be to their advantage, at least in the aftermath of this incident. This is where they should let go, lose the battle to win the war in the long term.

What did they lose anyway in having Tan dropped? In practical terms, not much. Others can do the job.

Fighting to reinstate him would cause greater fallout – they will again be the centre of attention, a mouth-watering opportunity for Umno to focus on.

The controversy between the rulers and Prime Minister Dr Mahathir Mohamad is not DAP’s battle. They have wisely not poked their necks in.

Let the PM work on this. Umno’s people like Youth chief Asyraf Wajdi Dusuki can always take him on and show his (Asyraf’s) stupidity in the process.

If the ruler imposes his way in a government structure, it will be his loss. The people will see the abuse, and it will look less like a genuine love for the people but rather something that arises from personal interest.

Anonymous_1543386425: Yes, DAP made a wise decision not to take a stand on a minor issue. Wait for the PM to take action later. Mahathir does not forget such things easily.

Politics in a coalition is all about the big picture and for the nation, not the party or its members who sometimes need to make sacrifices.

Mechi: DAP is the most organised political party. If they managed the nation well, we would be a developed nation in no time.

On this Johor issue, the royalty is interfering in the state politics and DAP is handling it with caution. Spot on, DAP secretary-general Lim Guan Eng.

Time will heal but Mahathir will know what to do when the time comes. Be patient.

My Understanding: @Mechi Democratically, DAP is a winner as it won 42 of 47 seats contested, the highest in the history of Malaysia, if I’m not wrong, in terms of percentage.

But politically it is weak as in some instances, it has bent backwards to accommodate the ruling coalition’s demands, going against its very own founding principles.

Roger 5201: So what wrong did Tan do or fail to do as Johor executive councillor for him to be dropped by the new MB?

Why is the rakyat in the dark over this when the processes for appointing an MB and the exco should have been transparent to the voters?

Fair Play: Guan Eng, are you telling those who voted for DAP this (that the party is not going to do anything)?

It was MCA which started the art, practice and the profession of the eunuch. Is DAP going to master this art and perfect it to be totally subservient to Bersatu (aka Umno 2.0) and you upgrade yourself to MCA 2.0?

By openly declaring it is not DAP’s choice, you just confirmed how low DAP has descended into.

Mohd Isnin: I think it's Mahathir's strategy to keep Tan and Bersatu’s Mazlan Bujang out of the exco list so that they can check on the menteri besar (MB) and report to him.

The duo would be better able to check and report the excesses of those who are pulling the puppet strings in Johor.

Now it is no point harping on this issue but move on and think about the welfare of the Johoreans. As they say, if two giants fight, it is the common man that will suffer in between.

Now let the new MB and his new exco team carry out their responsibilities. How effective will they be, only time will tell. Let us give them space to prove themselves.

Hopeful123: I don't understand when Johor MB Sahruddin Jamal said that he wanted "those he can work with". You mean the two dropped ones are troublemakers for you, or someone you are afraid of?

Kim Quek: Wrong, Sahruddin. You don’t decide on the new exco line-up, but the collective leadership of Pakatan Harapan does.

What you have claimed regarding your role in the new line-up smacks of dishonesty. A bad start for you.

The same dishonesty goes for Mahathir, whose claim of the sultan having played no role in the make-up of the new exco is disproved by the axing of the two former exco members reported to be disfavoured by the ruler.

Mushiro: Is it a coincidence or hypocrisy? The people the MB can work with and the people that he cannot work with are the same as the reported royal list.

MW: "Sahruddin, apart from being the menteri besar, will handle the Natural Resources, Finance, Planning and Economic Development Committee."

Everything related to money concentrated in one person's hands.