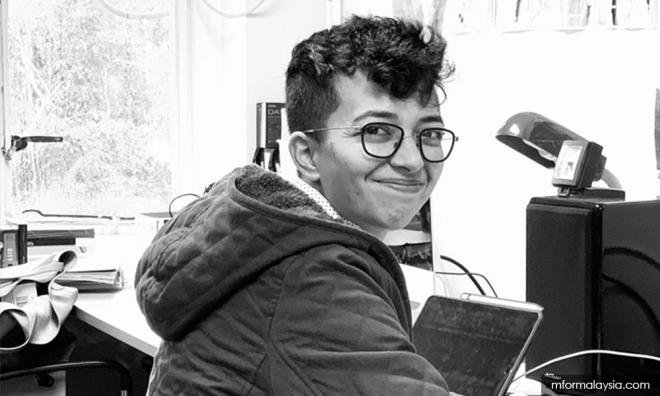 Filmmaker Ineza Roussille was not pleased when she found out that her grandfather, Dr Mahathir Mohamad, would be running for prime minister again, more than a decade after he relinquished the post.

“As a family, we are pretty tight. We try to go on a big holiday together once a year.

“But I never discussed politics with my granddad because I don't agree with some of the things he did, and there's an unwritten rule that we never criticise each other in public.

“I'd never really been on the same page with him politically and I felt it was the wrong direction for the country,” she said, according to the South China Morning Post (SCMP).

Ineza, who is Marina Mahathir's daughter, had helped shot a documentary on her grandfather's campaign for the last general election titled 'M for Malaysia'.

“So when my mother... asked if I could come on board to help shoot the documentary, I was extremely reluctant.

“Partly because I didn't want to be that close to the political machine and be seen to lose all objectivity. And also partly because I treasure my relative anonymity and I knew being by his side on the campaign, I would be a lot more exposed than I’m usually comfortable with,” she said.

Her co-director, Dian Lee, is the daughter of business tycoon Lee Kim Yew, who is one of Mahathir's close associates.

Unlike her father, Dian was also critical of Mahathir's previous term in office.

“I had a different opinion and viewpoint about Mahathir.

“I believed he was responsible for the sorry state of our country. In his quest to take Malaysia into a developed country status, he had removed the necessary checks and balances for the country,” she said.

Ineza, 32, also recalled how she had seen her schoolmate, one of Anwar Ibrahim's daughters, in tears in 1998 after Mahathir had sacked her father as deputy premier.

She said a group of friends was comforting Anwar's daughter and when she inquired what had happened, the others wagged their fingers in an accusatory manner at her as though she was the cause of the distress.

“I didn't go through anything like what Anwar’s kids suffered, but when 1998 happened, it was a weirdly messy time. People at school would say horrible things to me every day,” she added.

Since the documentary was mostly filmed during the 11-day campaigning period, Anwar, who was still in prison then, was not featured, while former premier Najib declined to be interviewed.

On the other hand, Anwar's wife Dr Wan Azizah Wan Ismail, who is now deputy prime minister, recounted how she had feared her husband had died following his arrest in 1998.

“My husband was taken in a van after a raid on our house. The next morning I was told by a friend […] that Anwar passed away. That made me quite hysterical.

“The rumour was spread by people who went to the room where Anwar was detained to change the light bulb. They saw this body was covered with cloth as if it was a corpse. That was a day, a moment in time, [that was] the worst moment of my life,” she said.

DAP secretary-general Lim Guan Eng spoke of how he faced tremendous opposition from within his party when Pakatan Harapan named Mahathir as their prime minister candidate.

Ineza said prior to making the documentary, she had only seen her 93-year-old grandfather during family holidays.

However, she added that witnessing Mahathir in his work mode for the first time was nothing short of awe-inspiring.

Ineza said she also found new respect for her grandmother, Dr Siti Hasmah Ali, who followed her husband throughout the campaign.

'This time I care'

On the downside, it has given the filmmaker a new perspective about Malaysian politics and her grandfather.

“When people attack him (Mahathir), it sucks. If he says something I don’t agree with, it sucks as well, because this time I care. I wasn’t old enough when he was PM before,” she said.

According to the SCMP article, Mahathir was a cooperative subject who explained what was happening to the crew on a daily basis.

There were also intimate moments captured on film, for example, Mahathir looking through a draft speech in his dressing gown fresh out of bed.

Ineza said the crew did not know what to do with the footage until Harapan won the general election on May 9.

“That was when we decided to turn the 90 hours of footage into a proper film. Prior to that, we were simply there to record,” she said.