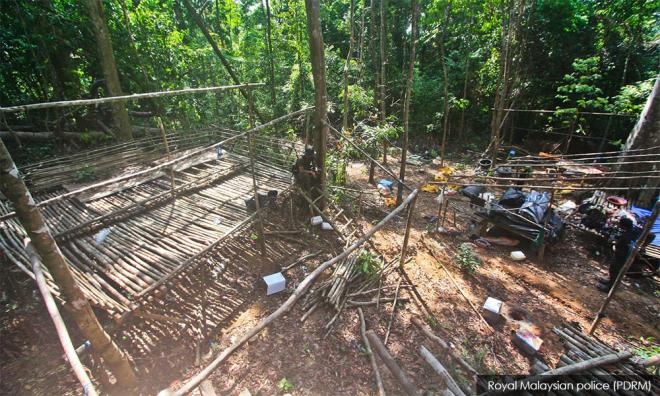 WANG KELIAN RCI | The search operation by the VAT 69 commando team in the forest area in Genting Perah, Perlis, in March 2015, led to the discovery of a transit camp with 14 tents being used by undocumented migrants.

The Royal Commission of Inquiry (RCI) into the discovery of the temporary transit camps and mass graves at Wang Kelian, Perlis, was told as such by Mohamad Afiq Sarmid, from the VAT 69 team based in Ulu Kinta, Perak.

Mohamad Afiq, who is the 17th witness giving testimony, said that the team also arrested five undocumented migrants about 200m away from the camp.

He said the operation, involving 24 personnel, was carried out following the discovery of a transit camp and graves at Bukit Wang Burma in January 2015.

His team was tasked to confirm if there was a settlement of undocumented migrants in Genting Perah.

“It took time for us to reach the place and we only found it on the third day, which was March 13,” he said, adding that he was instructed by the Intelligence Staff Officer to lead the operation.

Mohamad Afiq, who is now VAT 69 Delta Squadron assistant commander, said all the tents discovered by the team were old ones as only their frames remained.

Following the discovery of the camp, he said the team combed nearby areas and found five foreigners walking in the area.

A search was conducted on them, following which a pistol and a knife were found on two Thai nationals.

No weapon was found on the other three, who are Rohingya, but they did not have valid travel documents, he added.

Mohamad Afiq said he then contacted the commanding officer at the Tactical Headquarters and was instructed to hand over the evidence, as well as the five foreigners, to the Special Branch, Perlis police contingent headquarters.

Questioned by RCI deputy chairperson Norian Mai over why no grave was found during the operation, Mohamad Afiq said he was just following instructions and that the objective of the operation was to detect the presence of illegal immigrants.

Meanwhile, the 18th witness, Inspector Mohd Husyairi Musa, who was ordered to bring the illegal immigrants to the Padang Besar district police headquarters, said the foreigners were handed over to him at a rubbish dumping ground at the Perlis National Park at about 5 pm on March 13, 2015.

Mohd Husyairi, who was then Operation Intelligence Inspector at the Padang Besar district police headquarters, said the foreigners were handed over to him with their hands bound.

He added that after another search, a brown bag containing RM410 and Thai currency amounting to 100 baht, was found.