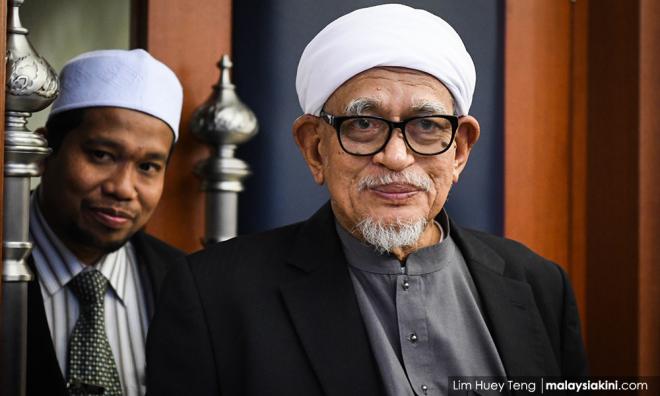 YOURSAY | ‘Let the bigots of old fade away, so that the new generation can start to think critically.’

Dangerous for non-Muslims to touch on Islam and rulers, says Hadi

Appum: PAS president Abdul Hadi Awang believes that non-Muslims have no right to comment on issues related to Islam and the Malay rulers.

Hadi seems like one who dons the holy uniform, but inwardly practises all that is forbidden in his religion. He has a forked tongue, he takes what is not his, and he preaches to his followers that others not like them are evil.

His mind seems to be so closed and limited that he cannot see humanity. What a bad representation of the religion.

The fact is, if the Federal Constitution was strictly followed, non-Malays would have nothing to complain about. Then, according to the "reasonable proportion" stated in Article 153, the Chinese and Indians would have 30 percent – their racial proportion – of the civil service.

That’s 1.6 million jobs or 480,000 government employees enjoying pension and medical benefits. But how many are there today?

David Dass: No, Hadi, constitutional lawyers are not cowed by the “greatness” of the provisions you speak of. Yes, there are provisions relating to Islam, the rulers and Article 153. None of these provisions makes non-Malays feel slighted or inferior.

The rulers are hereditary rulers, and it is only right that their position is secured by the Federal Constitution. They are rulers for all Malaysians. The position of Islam is similar to the position of Anglicanism in the United Kingdom.

Freedom of worship and the equality of all Malaysians are fundamental liberties under our constitution. Non-Muslims do not have problems with these provisions, and in fact, want Hadi and people like him to respect and uphold the constitution.

Bright Morning Star: Hadi has nothing good to say every time he opens his mouth. Nothing besides race, religion, royalty and bad mouthing the minorities in this nation. Who does he think he is?

Non-Malays, to my knowledge, are more than happy to uphold the Federal Constitution and recognise Islam as the official religion of the federation.

On the contrary, the extremists – Hadi and his goons from Umno and PAS – are the "emboldened culprits" who bully the non-Malays with their toxic race and religion rhetoric.

Mission Accomplished: If Hadi is right, then what do we even need the constitution for?

Don’t use threats, Hadi. The glory days of ‘ketuanan Melayu’ (Malay supremacy) and bigotry are over. You have cried wolf once too often.

If you want peace, be faithful to the constitution. If you wish the country to burn, the racists and bigots will not escape the flames too.

Clever Voter: Hadi is a political opportunist. He is not to be taken seriously. Non-Muslims have every right to comment on issues that threaten the future of the nation, including religion or rulers.

Everyone has the right to comment on corrupt politicians, including those from Pakatan Harapan.

Let’s face it, Hadi should know in today's world, all public figures, especially those whose existence is enabled with taxpayers’ money, are subject to public comments, good or bad.

Indeed, Hadi is a hypocrite by any standard. He should avoid stirring up racial tensions, for the sake of ensuring peace, unless he intends otherwise.

Ramesh Nair: Why do we keep entertaining religious fanatics who keep harping on issues that have nothing to do with the economy and the overall development of the country?

Why are the racist and religious parties getting mainstream media headlines? Selling news or fanning hatred? The media should be held responsible for such terrible clickbait headlines and reporting.

Let the bigots of old fade away with their beliefs, so that the new generation can start to think critically. When a nation’s people start questioning the relevancy of such beliefs and laws, it shows maturity, not dissent.

Not Convinced: Not reporting on what Hadi said will not make the problem go away. It will make it worse because one-half of the population will not know what the other half is feeling and thinking.

That was how Donald Trump won the US presidential election. Hadi needs to be exposed and countered, not ignored.

Anonymous_3b6c1foc: The PAS president is raising the race and religion rhetoric to dangerous levels when there has never been a situation where non-Muslims have questioned Islam or the royal institution. He revels in raising tensions.

He should be cautioned, as it is people like him that can cause extremists to strike. Never in Malaysia’s history nor in any part of the world do you find a majority race feeling they are under siege when they control the economy, security services and the government.

This act of Hadi in trying to corral Malay support exclusively by making provocative statements is encouraging extremism. There was a time when such statements would have been met with swift jailing.

BTN: The younger generation must be very confused because of people like Hadi who is projecting Islam in a very negative light.

Islam is a religion of peace and compassion but the actions and words of people like the PAS president make the religion seem the opposite of what it is supposed to be.

The trouble with this is when people get confused and embrace negativity, they will turn towards extremism, such as in the case of Christchurch and Colombo.

Do we want our youth to evolve into such hideous people? We want responsible leaders, not those who misuse people and religion for their selfish gain.

VGeorgeMy: What would Hadi know about any social contract not mentioned in the constitution? Is this another syariah-complaint lie to oppress minorities and the marginalised?

Does the law exclude the oppressed classes from participating in the life of democratic institutions?

Newday: All residents of Malaysia live under the direction of the sultans and the Yang di-Pertuan Agong. The states have rulers, the country has the king.

Hadi is saying that non-Muslims cannot comment on royalty? But we all live here. The rulers have responsibilities over all, not just Muslims.

Most of us pay taxes, part of which goes to the administration of the rulers’ affairs. Non-Muslims have as much right as anybody else to comment on the royalty.