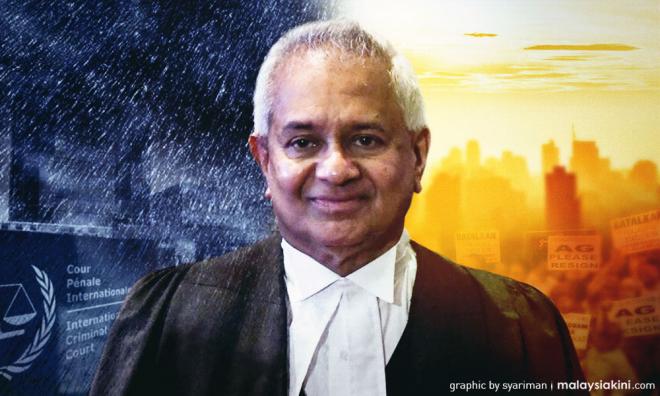 Tommy Thomas has dismissed the accusation by certain quarters that he failed to convince the Conference of Rulers on the Rome Statute of the International Criminal Court (ICC).

“Of course, it is not true. When it is raining, they put the blame on me. When there is no rain, they blame me too,” he said, according to Utusan Online.

The attorney-general, who had presented a working paper on the Rome Statute together with constitutional expert Shad Saleem Faruqi on behalf of the government to the rulers, said he would explain the matter tomorrow.

Thomas is slated to be a panellist at a forum organised by a group of student activists on the Rome Statute at University Malaya.

The students had leaked the alleged executive summary of a briefing by four academics to the Conference of Rulers, which then ostensibly led to Putrajaya's withdrawal.

Prior to this, Prime Minister Dr Mahathir Mohamad had blamed the Johor palace, particularly crown prince Tunku Ismail Sultan Ibrahim for the reversal.

Without mentioning names, he said there was someone who was sowing confusion regarding the issue.

Tunku Ismail was a vocal opponent of the Rome Statute, arguing that ratifying the treaty would threaten the position of the Yang di-Pertuan Agong.

On Tuesday, Foreign Minister Saifuddin Abdullah indicated that the Rome Statute chapter is still not closed.

Claiming that the facts were manipulated by certain quarters, including academics whom he described as “kangkung professors”, he vowed to expose their “bluff”.

"For International Convention on the Elimination of All Forms of Racial Discrimination (Icerd) it is the end of the road but for the ICC, we will see. Because we are calling their bluff,” he had said.