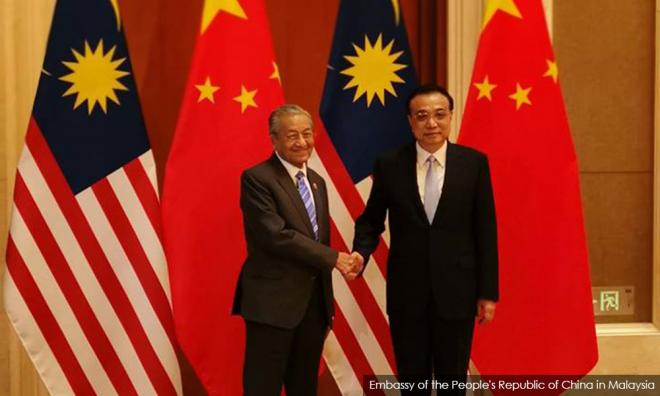 “I fully support the Belt and Road initiative. I am sure my country, Malaysia, will benefit from the projects, ” he said today.

Mahathir, who flew to Beijing three days ago for a five-day working visit to China, was among the few leaders who were given the opportunity to address the forum.

Chinese President Xi Jinping, who mooted the idea of the Belt and Road initiative, opened the forum that was attended by 37 world leaders and 5,000 representatives from more than 150 countries across the globe.

Xi proposed his signature infrastructure policy six years ago to revive the ancient Silk Road trade routes linking Asia and other parts of the world through rail, airports, pipelines and other means.

Mahathir, who described the meeting as “the most important forum”, also called for the passageways along the Belt and Road routes to be safeguarded and to be open and free for all.

“An essential element is the freedom of passage along these routes. A passageway is only as good as the freedom it provides. Both the sea and the land routes will pass through many countries.

“Bureaucratic hassles will slow the speed of travel. It is essential, therefore, for these passages to be free and open to all, ” he said.

He also said that besides being open and free for all, the passages must be safe as “terrorism and wars will make these modern marvels incapable of delivering the benefits they promise”.

Mahathir, who is here with several of his Cabinet ministers, also said that the world claims to be civilised but “these civilised people still resort to killing each other to resolve problems”.

“It is imperative that the world becomes less primitive and rejects the use of force and massacres in order to benefit from the opening up of new passageways for trade and freight that the Belt and Road initiative promises,” he said.

In a speech delivered before many world leaders and important personalities,  Mahathir also said that modern technologies could improve the passage of the Belt and Road routes between the east and west.

He also asked whether trains could be built bigger to carry more goods, raw materials and people.

The land passage, he said, should respond to the need of the increased trade between the East and West.

Trains could shorten the passage between East and West as they are faster than ships, said Mahathir.

The prime minister also said that as the volume of trade increases and enriches the trading partners, it, nevertheless, also increases the threat to the littoral states (those with a shoreline) from oil spills and the dumping of waste at sea, which pollutes the sea.

Littoral states could not collect toll to finance the cleaning-up work as it happens in designated international waters, he said, alluding to the oil spill incidents and pollution happening in the Strait of Melaka.

“They (littoral states) are the ones to suffer pollution and they have to maintain a sizeable force to clean up the sea and their shores. It does not seem fair that the poor littoral states should be burdened with this responsibility,” said Dr Mahathir.