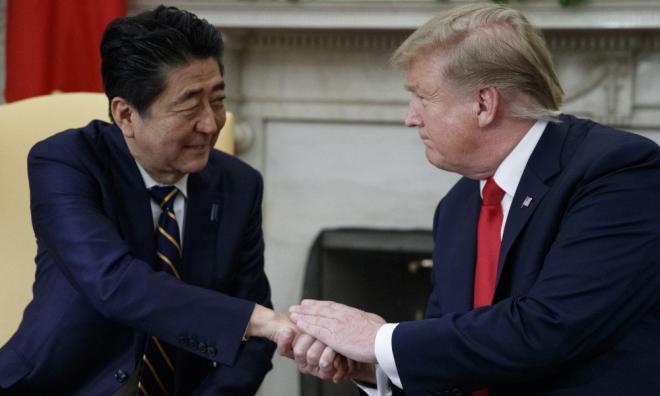 Trump presses Japan's Abe to build more vehicles in the US

US President Donald Trump pressed Japanese Prime Minister Shinzo Abe to have Japanese automakers produce more vehicles in the United States, according to a readout of their recent meeting provided by the US ambassador to Japan on Saturday.

The two discussed recent public announcements by Japanese carmakers, including Toyota Motor Corporation’s decision to invest more in US plants.

“We talked about the need to see more movement in that direction, but I think the president feels very positive that we will see such movement because all the economics support that,” said Ambassador William Hagerty.

Trump told a campaign rally in Green Bay on Saturday that Abe said Japan would invest US$40 billion in US car factories, though Trump did not give details on the timeline for the planned investments.

Toyota, Japan’s largest automaker, said last month it would exceed a 2017 pledge to invest US$10 billion over five years with a new commitment to reach nearly US$13 billion over that period.

Trump has prodded Japanese automakers to add more jobs in the United States as the White House threatens to impose tariffs of up to 25 percent on imported vehicles, on the grounds of national security.

Trump on Friday said it is possible that the United States and Japan could reach a new bilateral trade deal by the time he visits Tokyo in May, but he and Abe cited areas where they differ on trade.

“We want to ensure that the US has trading terms with Japan that are no less favorable than any other nation,” Hagerty said in a phone call with reporters.

He added that Trump is planning to attend the summit of the Group of 20 industrialized nations set to take place in Osaka, Japan in June.

Separately, Trump was optimistic trade talks with China would be successful, the ambassador said.