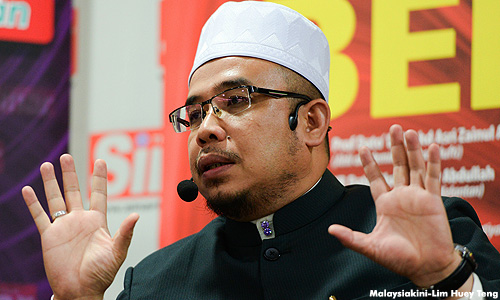 Perlis mufti Mohd Asri Zainul Abidin has questioned the arrest of independent preacher Muhammad Zamri Vinoth Kalimuthu for allegedly insulting Hinduism in a sermon, which was uploaded on the internet.

"This is the reality we are seeing today. All kinds of statements are made by individuals in the government that insult Muslims and cause racial tension but are only called up to give their statement.

"Many cases where the Prophet Muhammad was insulted and Islam belittled also only saw perpetrators summoned to have their statement recorded.

"But a preacher who shared his personal experience in converting to Islam in a mosque in Kelantan which was only intended for Muslims ended up with an arrest," he said in a Facebook posting.

Asri said Zamri, who is described as a student of controversial preacher Zakir Naik, had contributed much in building good inter-religious relations.

He also questioned whether what Zamri said was not factual.

"Was he insulting or was he only relating his personal story?

"Did he intend to create tension like statements by certain leaders that led to the temple and fire department tragedy?" Asri asked in an apparent reference to the Seafield temple riots in Subang Jaya last year where one fireman was killed.

He questioned why those leaders were not arrested.

Yesterday, Zamri was arrested by cops after several police reports were lodged against him for allegedly insulting Hinduism.