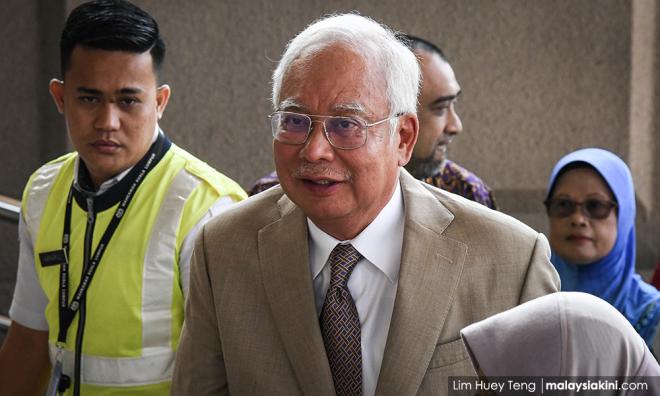 The prosecution is seeking for postponement of Najib Abdul Razak’s 1MDB trial until the former prime minister’s SRC International case is settled first.

The application was made via motion at the High Court registry today with a certificate of urgency following their unsuccessful attempt to get Judge Collin Lawrence Sequerah, who will be hearing the 1MDB case, to postpone it.

The public prosecutor in his affidavit attached to the motion cited that the SRC case which started on April 3, and was scheduled to be heard until May 10 before Judge Mohd Nazlan Mohd Ghazali, had so far seen 12 prosecution witnesses called.

Copies of the motion and affidavit were made available to the media.

Yesterday, Izzat said the prosecution had written to Judge Sequerah asking for the 1MDB case to be postponed, citing there were no objections from the defence.

"Judge Mohd Nazlan also had informed that he had no objection hearing the SRC case on the dates set for the 1MDB trial on condition Judge Sequerah postponed it,” he was quoted as saying in the affidavit.

Izzat said his side had instructed DPP Ahmad Akram Gharib to write the letter to Judge Sequerah and ask for a mention today at 9am so that they could be present to seek postponement of the 1MDB case.

However, he said Judge Sequerah rejected the application.

Izzat said that in the interest of all parties, including witnesses subpoenaed to attend the SRC case, the case involving the former prime minister should be concluded as soon as possible.

"This application also does not in any way prejudice the accused in this (SRC) case,” he said.

Izzat stated that the notice of urgency was for the motion to be heard before the 1MDB trial starts on May 14, because that case was also of public interest.

Najib, 66, is charged with three counts of criminal breach of trust, one charge of abusing his position and three counts of money laundering involving SRC International Sdn Bhd funds amounting to RM42 million.