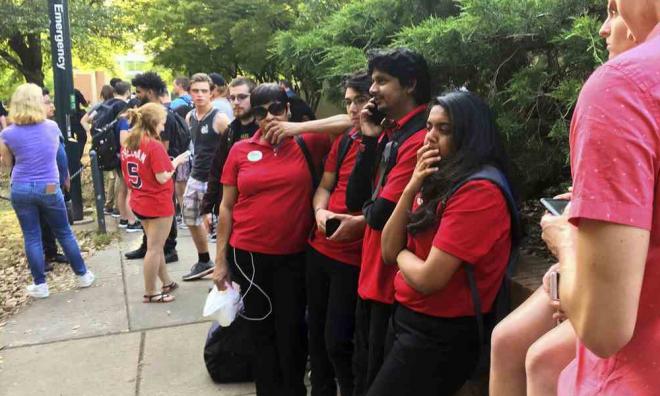 Two people were killed and four others wounded, two with life-threatening injuries, in a shooting on Tuesday at the University of North Carolina at Charlotte, area emergency management officials said.

Local media reported that a suspect believed to be a student at the school was taken into custody following the rampage on the last day of classes at the school for the academic year.

Final exams were scheduled for next week.

Television station WBTV in Charlotte reported that gunfire erupted about 5.45 pm. (2145 GMT) near the university's Kennedy Hall administrative building and that one person had been arrested.

"We are in shock to learn of an active shooter situation on the campus of UNC Charlotte. My thoughts are with the families of those who lost their lives, those injured, the entire UNCC community and the courageous first responders who sprang into action to help others," Charlotte Mayor Vi Lyles said on Twitter.

Mecklenburg Emergency Management Services, an independent agency that handles emergency services for the county, confirmed on Twitter that two people were dead on the scene and that four others were taken to a hospital, two of them with life-threatening injuries.

“Absolutely heartbroken to learn of the two deaths at UNC-Charlotte. Details still unfolding, but prayers with those receiving medical care right now,” US Representative Mark Walker, a Republican from North Carolina, said on Twitter.

WSOC-TV reported that the shooter was a student at the university.

There was no word on the condition of the wounded victims. The suspect was not immediately identified by police, who set up a media staging area near the school.

The school said later on its website the campus was on lockdown and that students and staff should “remain in a safe location.”

Video footage posted to social media showed students evacuating campus buildings with their hands raised as police officers ran past them toward the scene of the shooting.

A spokesperson for the Charlotte-Mecklenburg Police Department confirmed there had been an active shooter at the university but declined to give any further information.

According to its website, the University of North Carolina at Charlotte enrols more than 26,500 students and employees 3,000 faculty and staff.