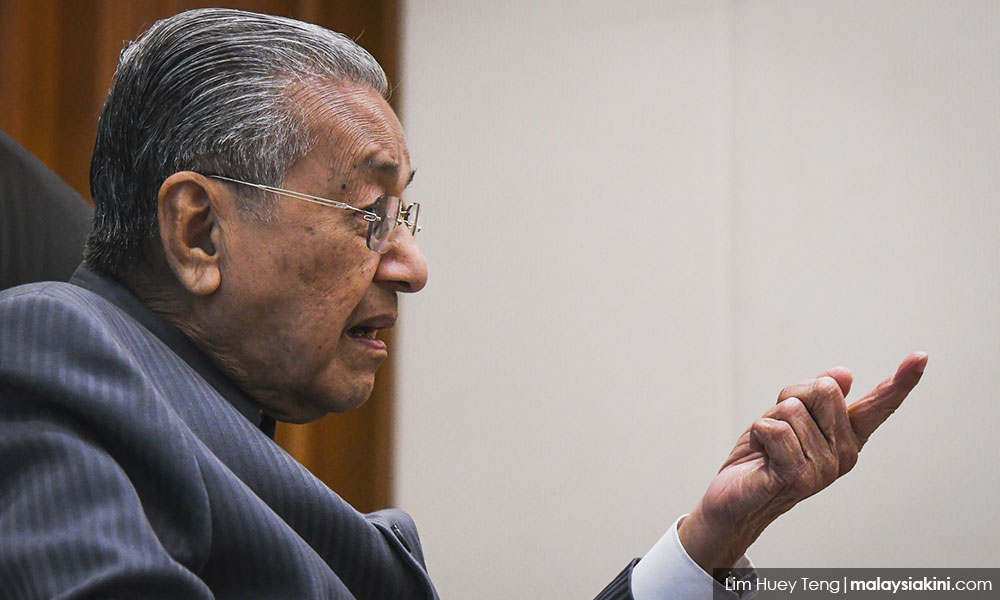 Dr M: No world stability if Israel's terrorism not stopped

Prime Minister Dr Mahathir Mohamad once again today described Israel as a terrorist nation and the root cause of instability in the world.

Addressing youths at the Al Sharq Annual Conference 2019 in Kuala Lumpur, the majority of whom are from Middle East countries, the 93-year-old leader stressed that the time had come for the international community to stand together and end Israel’s occupation of Palestine.

"Apartheid, genocide, crimes against humanity, crimes of aggression and all the evil that mankind can inflict on others can be compiled in Palestine - courtesy of the barbaric, arrogant, terrorist nation called Israel.

"Until and unless the international community is committed to find a solution to bring an end to the occupation of the land belonging to the Palestinians, the region and the rest of the world will not have much of a chance for stability and order," he said in his keynote address before opening the conference, held the first time in Malaysia.

His statement led to overwhelming applause from the 1,000-odd participants.

Describing Palestine as the core of all tragedies, he said the world was not stable and neither did it look like to be so in the near future.

Dr Mahathir said the senseless murder of innocent people continued in the invasion of Afghanistan and Iraq by the US-led coalition in 2001 and 2003 respectively, which had seen more tumult than stability in the region before the Arab Spring came about.

"Nations like Syria, Libya and Yemen today provide images of a human tragedy while the rest of the world watch helplessly.

"Their sufferings did not originate from internal strife but rather interference and interventions from external powers which obviously were doing it out of self-interest, disguised under the veil of democracy and human rights," he said.

The prime minister said that ancient civilisations or rather these cradles of civilisation were pummelled to a pulp by present-day powers that have styled themselves as the leaders of modern-day civilisation.

"There is nothing civilised in their actions or behaviour. The only thing they can showcase is technology capable of producing weaponry that are extremely efficient in maiming, killing and murdering people by the thousands," he said.

He shared that he took pride in the fact that Malaysia, as a multiracial and multi-religious country, had been able to move forward despite the diversity, although he admitted that Malaysia has had its knocks and falls due to the differences but it had also managed to turn them into strengths and reason for unity.

"In fact, we have come to believe that we are quite successful as a nation because of diversity. Indeed, managing the diversity is not pleasant at times. Most times, the differences are amplified and the similarities subdued.

"We have our own sets of prejudices and bigotry amid our people but, by and large, we have come to accept that any attempt to champion one race or religious group at the expense of the other will result in destruction of all that we have worked hard to build.

"Instead, we keep working on our common interests and common grounds. It is not easy but we kept plugging at it and Alhamdullillah, we have managed thus far," he said.

He said the differences in religion, race, culture and customs required Malaysian to make compromises and to be accommodating and they had learnt to tolerate many things.

Going forward, Mahathir, in his speech titled “In Search of a More Just and Stable World Order”, said the youths, being the future leaders, had a pivotal role in making the world a better place and every leader should keep close to them.

"In my many years as a politician and entrusted to lead sometimes, I’ve always tried to tried my level best to fulfil requests from youth organisations and movements.

"My reasons are quite basic – if I want to see changes made and ambitions realised, the youths are our best bet," he added.

Related Reports
Senator clarifies 'drop religion in MyKad', apologises for 'embassy in Israel'
a year ago
London to host world para swimming after M'sia stripped over Israel
a year ago
New Palestinian government sworn in amid factional tensions
a year ago
Minister: We lost 'golden opportunity' to refer MH17 to ICC
a year ago