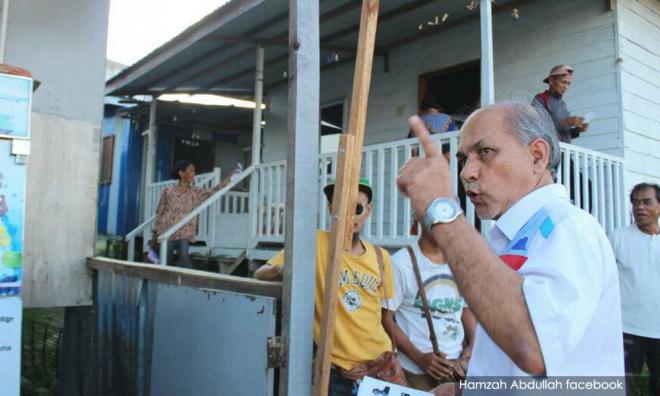 Indie candidate: I'll give my life fighting for the people's rights

"The power is with the people on May 11. If you choose me, I will gadai nyawa (give my life away) to defend the rights of the rakyat.

"I don’t care whether you are Chinese, Malay, Indian or Kadazandusun, as long as you are Sabahan, I will fight for you.

"I will not join any party and will stay independent. I will fight because I know the people’s problems. Every day, they come to me complaining about their hardships. If I only wanted what’s best for my personal interests, I would have stayed in Pakatan Harapan for a long time.

"(Amanah president) Mohamad Sabu would call me and I could ask for projects. I know him for 30 years," he told a press conference which was reported by the New Straits Times today.

The former Sabah Amanah chairperson told Malaysiakini that its earlier report suggesting he could get Mohamad Sabu to give him projects for Sandakan were taken out of context.

Hamzah said he meant that he could have stayed on in Pakatan Harapan but chose to become an independent candidate to fight for the people of Sandakan.

He also threatened to lodge a police report against Malaysiakini for "malicious intent" and insisted that he never mentioned anything about him getting projects from Mohamad Sabu.

NST reported that during the press conference, Hamzah teared up while speaking about his "genuine" struggle for the rights of the people of Sandakan.

The independent candidate said he was funding his campaign with his own money and had refused any external financial assistance.

"When (PBS vice-president) Linda Tsen became the candidate for the Batu Sapi parliamentary by-election to replace her late husband, they (Harapan) said it was nepotism and cronyism.

"If you’ve commented about these, then you should not do it so people respect (you) […] there are many other candidates.

"Wong’s nomination is not based on her quality as a fighter but to gain the sympathy of the people," he said.

Amanah had released a statement on nomination day saying Hamzah had quit the party a day before.

Hamzah is in in a five-cornered fight against DAP's Wong, PBS' Tsen and two other independent candidates.

The Sandakan by-election was triggered after Stephen passed away on March 28. Polling is set to be held on May 11.