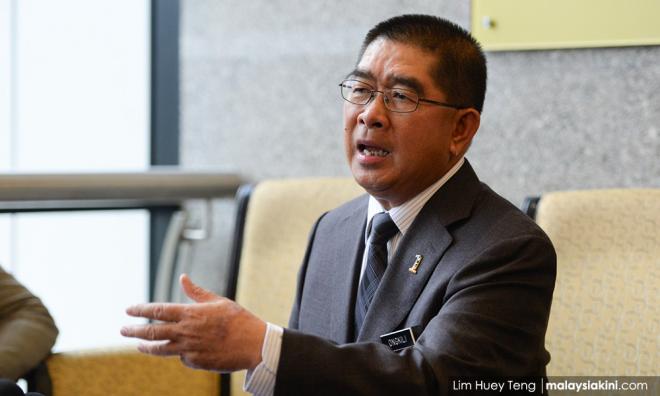 "All ongoing energy projects in Sandakan were the plans and fund allocations approved by the then-BN government, when I helmed the Energy, Green Technology and Water Ministry," he said in a statement today.

"Indeed, it was we who formed the Sabah Special Projects Planning and Delivery Unit (Sapadu), specifically aimed at planning and implementing energy infrastructure projects."

Ongkili, who served as energy minister from 2013 to 2018, was responding to his successor Yeo Bee Yin, who said yesterday that RM135.2 million has been budgeted for the Special Project for Electricity Supply in Sabah (PPKBES), which is meant to improve electricity supply in Sandakan.

Yeo said this while on the campaign trail for Vivian Wong, the DAP candidate in the May 11 Sandakan by-election.

The minister also said that there is nothing much that PBS can do for the people in the constituency, as the party had failed to deliver on its promises when part of the ruling government.

PBS, which is fielding its vice-president Linda Tsen for the by-election, was a component of BN until after last year's general election.

Ongkili refuted this, pointing out that the BN administration had allocated RM2.3 billion to deliver some 70 electricity projects from 2017 to 2019.

This, he said, involved transmission, generation and distribution works, such as the Mowtas and Permai Main Distribution Substation (PPU), Bukit Nenas PPU and Batu Sapi PPU, as well as transformation projects at Tshun Ngen and Sim Sim PPU, among others.

Aside from that, Ongkili noted that BN approved the return of Sabah Electricity Sdn Bhd (SESB) to the state government, and claimed that it was Harapan that held up the move.

The PBS leader also said in his statement that Harapan has not planned nor implemented any new energy projects.

He stated that even the gas pipeline from Kota Kinabalu to Sandakan project had to go through a series of consultations with stakeholders.

"Yeo knows too well that the Energy, Science, Technology, Environment and Climate Change Ministry was not party to the appointment of contractors nor the payment of project advance. This was under the purview of the Finance Ministry.

"So why is Yeo claiming credit for electricity projects in Sandakan? This is a classic case of lembu punya susu, sapi punya nama (one man's sweat becomes another man's glory)."

Ongkili said that claiming credit for others' work is "typical of Malayan federal ministers," but stressed that he did not blame Yeo due to her inexperience.

"You can't blame them either, just like the DAP candidate for Sandakan who is just a political novice, Yeo is a novice in the government administration," he said.

The May 11 by-election will see a five-cornered fight between Wong, Tsen, and three independent candidates.

Indie candidate: I'll give my life fighting for the people's rights
1 May 2019
Sandakan polls campaign: Police get 3 reports, open 2 probes
1 May 2019
Tsen hopes for PBS comeback with Sandakan win
1 May 2019
Did Ongkili raise 1MDB issue in cabinet, asks Kit Siang
1 May 2019