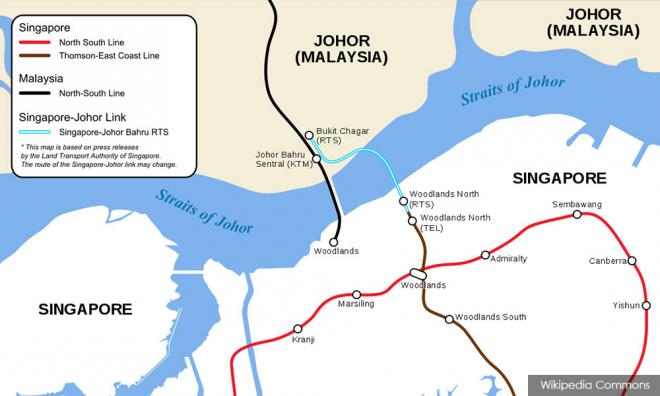 Putrajaya's review of the plans to construct the Rapid Transit System (RTS) from Johor Bahru to Singapore had hit an unexpected snag, according to sources.

It was discovered that a plot of land in Bukit Chagar, which the federal government was supposed to own, was now in the name of Johor ruler Sultan Ibrahim Sultan Iskandar instead.

Those familiar with the matter told Malaysiakini that the Johor Department of Land and Mines discovered this on Jan 28.

The land was one of five lots in Bukit Chagar that Putrajaya received from the Johor government in 2012 as part of a land swap deal to build the Johor Bahru Customs, Immigration and Quarantine Complex (CIQ).

It is unclear when or how the sultan acquired the land but sources believe the title for the 4.5-hectare plot was transferred under the previous BN administration sometime between 2017 and 2018.

Sources told Malaysiakini this means Putrajaya would have to fork out around RM495 million in compensation to acquire the land which it was supposed to own.

"So now the problem is the cost. That land was supposed to be federal land but now there is an additional cost to deal with," said one person on condition of anonymity.

Malaysiakini is seeking a response from the Johor palace.

Former Johor menteri besar Khaled Nordin, meanwhile, told Malaysiakini that the question should be referred to the Land and Mines Department.

The disputed land is currently being used as a public parking lot.

Besides the land in Bukit Chagar, sources said Putrajaya might also have to acquire an underwater plot of land at the Johor straits said to be worth around RM198 million from the sultan.

In other words, the federal government would need to compensate the sultan to the tune of RM693 million for the two plots.

Met in Kuala Lumpur today, Johor Menteri Besar Dr Sahruddin Jamal waved off the media and entered his car when asked to comment on the status of the Bukit Chagar land for the RTS project.

Previously, it was reported that Putrajaya requested a six-month extension from Singapore before making a final decision on the RTS project.

The 4km RTS train line was planned to link up the Bukit Chagar station in Johor Bahru with the RTS Link Woodlands North Station in Singapore via a 25m-high bridge across the Straits of Johor.

Transport Minister Anthony Loke had estimated the train line to cost RM4 billion, and that Putrajaya was seeking ways to lower the cost.

Mahathir had said the federal government is also open to cheaper alternatives to the RTS.