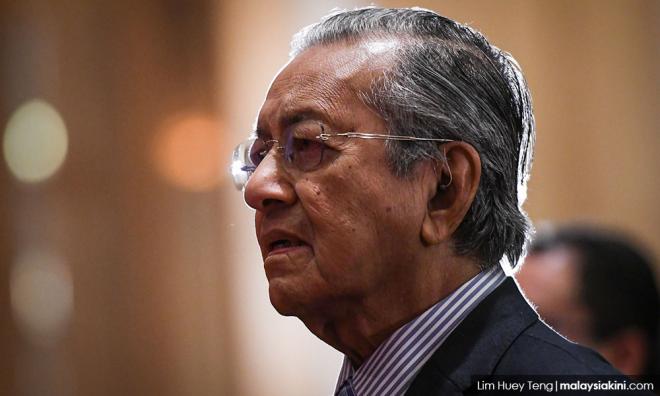 PM warns of those out to topple gov't for fighting corruption

Prime Minister Dr Mahathir Mohamad today said there are some, including civil servants, who want to oust the Pakatan Harapan government because of its efforts to combat corruption.

Mahathir stated that there were those who said the Harapan government was not as good as the previous administration because it rejected the immoral activity.

“There are some who feel that the government is not as good as the previous one because this government does not allow bribes.

“There are some who feel this government should not continue but (the country) should go back to a corrupt government which benefits them,” he said in his speech at a town hall with Perak civil servants.

Commenting further, Mahathir said when the leaders elected by the people in the general election were corrupt, many parties will become victims, including future generations.

At the same time, all the government’s plans to develop and build the nation to once again become an 'Asian Tiger' would not be realised, he said.

“We realise that the previous government was toppled because of corruption, even though they felt that bribery would get them the support of the people.

"But in the end, the people overthrew them even though they were offered all sorts of bribes,” he said.

'Country's wealth should be shared'

The prime minister also said the country’s wealth should be shared with all the people in the country, regardless of race, religion and skin colour, so as to avoid any undesired occurrences.

“If we neglect to distribute wealth properly, there will unhappiness among the people and this will eventually cause chaos.

"That is why all efforts must ensure that the distribution of income and opportunities are for all,” he said.

Earlier, Faizal (photo) said in his speech said there is still a small number of civil servants who were trapped by their sentiments towards their old ‘bosses’ from the previous administration.

“As human beings, we are bound by ties of friendships built between civil servants and members of the previous administration.

“Today’s administration has no intention of insisting that these bonds be severed, because that is against the teachings of Islam. It is also contrary to the principles of mature politics practised by this administration,” he said.

However, Faizal stressed that there should be limits, as decisions and actions should not be influenced by old friendship ties.

“Do not ever forsake the oath of loyalty to the government by neglecting the orders that have been given or not carrying out instructions or decisions, because of a conflict of sentiments towards the previous administration.

“This is a form of betrayal of the trust given by the people. Stop the political games,” he said.

'Your word is not your bond' - Kit Siang takes a swipe at Pandikar
5 May 2019
‘Man of integrity’ Hamid able to fix 'battered' police image - Patriot
4 May 2019
Court rejects Zahid's bid to retrieve passport for umrah
3 May 2019
Bung, wife claim trial to three charges for graft totalling RM2.8m
3 May 2019