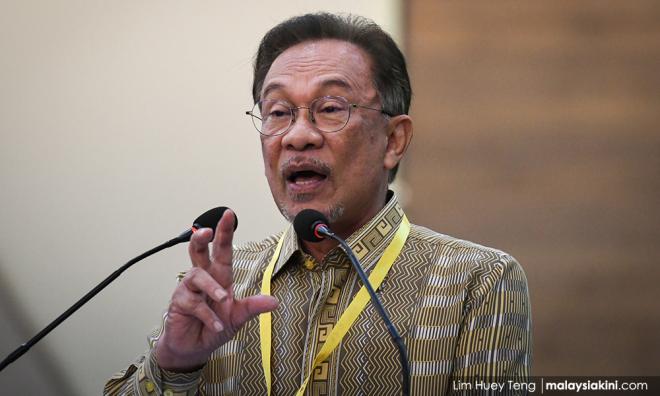 PKR president Anwar Ibrahim today warned Harapan leaders against the misstep of reneging on its manifesto promises due to pressure or temporary shocks.

Speaking at the DAP National Conference 2019, Anwar said Harapan should admit it has problems communicating its policy decisions and reassure the people that all of its promises will be fulfilled.

"Changing policies which have been accepted for more than half a decade is not an easy task.

"But we must remain confident, and I agree with what was said by DAP secretary-general Lim Guan Eng at the end of his policy speech," said the Port Dickson MP.

Harapan critics had accused the ruling coalition of committing policy "U-turns" after mounting public pressure on issues, including ratification of various human rights treaties and abolition of the death penalty.

Lim, in his policy speech which will be debated by 969 delegates gathered at Shah Alam Ideal Convention this afternoon, underscored the importance of Harapan fulfilling its election manifesto promises in order to convince the people of its worth compared to BN.

Anwar similarly urged Harapan leaders to continue honouring its commitments to the people.

"We were given a mandate under the premise that Malaysia will continue to struggle in defence of every single citizen of this country.

"Therefore, consideration must be given to the people's welfare based on what is required - need-based policies for every rakyat in this country," he added.

Anwar, however, cautioned that the "elite in towns" working on needs-based policies should ensure they took into account the needs of poor fishermen, smallholders and others in the rural areas.

"We cannot talk about need-based (policies) if we don't have an economic policy that can provide for the wellbeing of all Malaysians, particularly the poor and marginalised," he said.

At a press conference later, Lim said Harapan chairperson Dr Mahathir Mohamad could not be present as the prime minister had a prior engagement which must be honoured.

Lim pushes for needs-based policies, says it's the 'right thing' to do

Guan Eng says no party can rule alone, not even DAP