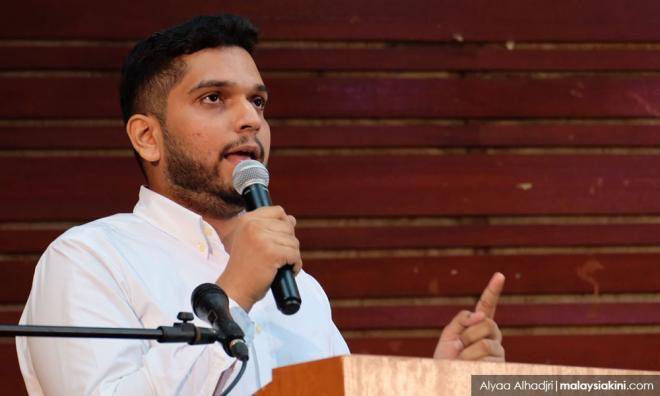 Only cruel rulers are afraid of the ICC, says student activist

The people must accept that the rulers are fallible and are not excluded from the possibility of committing a crime, student activist Asheeq Ali Sethi Alivi has said.

"Only cruel rulers are afraid of the International Criminal Court.

"The people must not rule out the fact that the rulers are human beings prone to making mistakes," he said in a statement on the Rome Statute of the International Criminal Court (ICC).

He agreed with senior lawyer Muhammad Shafee Abdullah's argument that rulers may be subjected to prosecution by the ICC if they committed offences in their own personal capacity and if the attorney-general refuses to prosecute them.

However, Asheeq said certain quarters had manipulated the issues surrounding the Rome Statute.

"The Rome Statute of the ICC has been manipulated by certain quarters to the extent that they are certain the rulers are excepted from committing a crime and no action can be taken against them," Asheeq said.

He also took aim at the four academics who advised the rulers to purportedly reject the Rome Statute.

"I agree with Shafee that the rulers would be affected only if they perpetrate offences and the government fails to prosecute them... this is the only way the Rome Statute would affect the rulers... unlike the lies furnished by the four academics the other day," he said.

Asheeq had challenged the quartet to defend their arguments in a forum at Universiti Malaya, which had Attorney-General Tommy Thomas as one of the panellists.

Two of them had rejected the invitation to attend the forum, while two more did not respond, he said.

International Islamic University Malaysia's (IIUM) former president Rais Yatim yesterday told the forum that he would meet the quartet and seek an explanation of their arguments against the treaty.

Asheeq said that all parties should take a holistic approach in tackling the issue pertaining to the Rome Statute.

Malaysia can learn from countries which have a constitutional monarchy, such as Jordan and Britain, which have implemented the Rome Statute and do not have to resort to amending the constitution, he said.

The ICC has the jurisdiction to prosecute individuals for four international crimes, namely genocide, crimes against humanity, war crimes, and crimes of aggression.